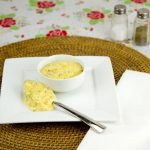 Béarnaise sauce is like a cooked mayonnaise, with Tarragon added to it. That's about as simple as I can put it. It CAN be a bit prickly to make, but it's got ENORMOUS flavor, is rich with healthy fats and is extremely low carb. It's also versatile. Put it on your eggs for breakfast or your steak at dinner!

In classical French cooking, there are 5 "mother" sauces. The 5 sauces are Béchamel (thick milky gravy), Espagnole (thick brown gravy), Velouté (thick chicken gravy), Hollandaise (cooked thick eggy gravy) and Tomate (thick tomato gravy). I feel like when I was in cooking school, I was taught that there were actually 7 mother sauces, with the other two being mayonnaise (uncooked thick eggy gravy) and demi-glace (thick veal gravy, made via reduction). The idea is, adding a few ingredients to each of these mother sauces will transform them into a totally new sauce!

Béarnaise sauce is a child of the mother sauce "Hollandaise". The method of preparation is essentially the same, with some minor variations (the biggest being the tarragon).

My Béarnaise sauce recipe isn't a "true" Béarnaise. It is, in fact, an abomination. Mine is thoughtfully constructed, tastes VERY similar and just makes more sense to me as a fully realized sauce, even though most French chefs would like to speak French at me ... harshly! The big changes are: I've omitted chervil, simply because it's such a challenge to find. If you do find it, add some. It's delightful!. I'm also not using clarified butter. Instead, I'm using whole melted butter. Butter is roughly 80% butter fat, 19% water and 1% "tasty butter bits" (milk solids). More often than not, water is needed to thin the sauce as it is built. Why not use the water in butter? The milk solids just add more flavor ... why remove them? Also, I know Ghee is like the new butter, but ... I suspect more people have old-school butter than ghee. It is also common to strain out the shallots. I never do this. I like them! Finally, I'm adding a smidgen of heavy cream. This is purely optional, but because a cooked egg based emulsion can be such a fickle sauce, the store bought homogenized cream helps the emulsion take place and HOLD.

Each of these variations take a step further away from a true Béarnaise. Escoffier is probably turning in his grave, but ... he evolved food from his predecessors ... I'm simply throwing in my spin!