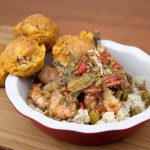 I'm a strong believer in attacking your own weaknesses. I suppose I got this idea from working in kitchens. There's a famous Chicago chef who would push himself to improve the areas in which he was weakest. If he was lousy would butchering fish, he would arrive early at the fish markets and help the fisherman unload their catch. He'd do unpaid work at sushi restaurants. He'd spend every opportunity to turn his weakness into a strength! Then, one the weakness is no longer a weakness, he would look for a new weakness ... and attack it!

Aside from planking, one of my biggest weaknesses (dare I say "nemisis") is the slow cooker (AKA the "crock-pot"). I'm sure just about every crock-pot recipe on my website has me belly-aching about it, but the simple fact remains ... the slow cooker baffles me. They are in millions of homes, but I've used one less than 10 times in my life.

This recipe is me trying to step up my game. This is me doing a slightly more advanced recipe than my previous "meat in a cooker ... cook" recipes. This one has quite a few ingredients, with one being added near the end. It's altogether really pretty simply to do, but as usual, I approached it with fear and trepidation.

This time, I came out of it victorious! Take THAT, Crock-pot! IN YOUR FACE, SLOW COOKER! I WIN!

(ok, that's a bit over the top, but I was really proud of this one. It was tasty!)

If you really think about "American" food, your mind is probably going to think about things like hamburgers or grilled cheese; maybe pizza. I've never really considered the US much for having it's own indigenous cuisine. That's not to say it doesn't excel at being an extraordinary fusion of flavors and cultures, but it hasn't put much of its own thing out into the world. Cajun and Creole foods, while being a combination of other cultures (French, Spanish, German, West African and Choctaw), have formed enough of their own unique and clear styles to be appropriated by Americans.

Here's where our story takes a bit of a twist. This is not a true gumbo. It breaks several of the rules that make up a Gumbo, be it a Cajun or Creole version. This one falls somewhere between both, fuses some things that it probably shouldn't (chicken and seafood) and totally omits two of the common hallmarks of a gumbo: roux (a cooked mixture of flour and fat) and/or filé powder (a spicy leaf stemming from the sassafras tree). Both are thickeners, with one being high in carbs and the other being tough to find, I chose to go with the glue which is the dish's namesake: okra.

Okra can be found in West Africa, Ethiopia and Southern Asia. The Bantu language calls Okra "ki ngombo". It is commonly believed that the name "Gumbo" comes from this word and origin. Okra is a vegetable that looks a bit like a jalapeño, but without the heat and ridges along the sides. Okra is famous for its "goo". When they are cooked, they turn a bit slimy, which is great for thickening gumbo!

Because gumbo needs something to thicken it ... I chose okra. The rest of the info ... is in the recipe! Enjoy it. I did! ☺