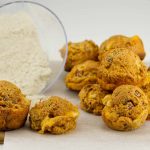 As is so often the case with baked goodies, they tend to be sweet, rather than savory. I recently added Jennifer Eloff's Splendid Gluten-Free Bake Mix to my website and wanted to bake some things. Since starting a low-carb lifestyle, I haven't baked very often. This was a chance to do just that! However, I didn't want EVERYTHING I baked to be a sweet dessert. I wanted at least one "savory" baked it.

This is that item!

Back in the Dark Ages, I used to make "Sweet Corn and Ham Beignets", which are like corn and ham doughnut holes. They were AMAZING (BUT TERRIBLE FOR YOU!)! That's where I got the idea for these things. However, rather than the corn, I substituted cheddar cheese! I tweaked it and played with it, until I was happy with the new muffin recipe.

The end result is a FANTASTIC savory ham muffin, with melted cheese all throughout and a nice spicy kick! As an added bonus, they reheat REALLY well, too! YUMMERS!