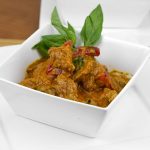 I used to live in a part of Seattle called "Fremont", about 15 years ago. I'd bet over 10,000 people lived in the fun little neighborhood. There were pizza places, greek food restaurants, ice cream establishments, etc. However, it was undeniable that Thai restaurants were the big presence in a town billing itself as "The Center of the Universe". At that time, there were roughly 27 Thai restaurants. I just drove through it the other day. Looks like maybe 28!

Thai restaurants and Thai food have become almond ubiquitous on the restaurant landscape. They are everywhere! Yet, somehow, the food still manages to hold a level of mystique in homes.

I remember taking classes on Asian cuisine in cooking school. The teacher was an adorable and quick talking little Chinese woman, who would CONSTANTLY say, "GGS!" Everything Chinese, it would seem, begins with "GGS!" (Ginger, Garlic, Scallion). Don't get me wrong, Chinese food is AMAZING and possibly the richest of all culinary lore (Sorry, France!), but I tend to believe certain corners of the Chinese cuisine have been brought into most Western homes ... in the form of stir-frys, fried rice, ginger-soy marinades on meat, etc.

Thai, with what feels just as strong of a grasp in the restaurant scene, doesn't feel to have made as many inroads in the Western home kitchen. It's a shame, too! So many amazing flavors! Let's start cooking with these ingredients, folks. Some AMAZING flavors to be had, here!

What follows is my interpretation of a Pork Curry recipe that I would get at a favorite Thai haunt just up the street from my battered old San Francisco apartment, in the Lower Haight district. It's thick and gloppy, while being RICH with flavors, dense with coconut milk, spicy and complicated. It's also little more than a quick stir fry. If you have the stuff, the actual CURRY is mere minutes away. Go get the stuff!