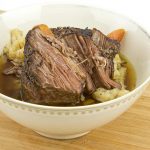 Growing up, I didn't get a lot of pot roasts. I don't believe my mother EVER made one (Mom, did you? I don't remember ...). One truly memorable pot roast was cooked in a solar oven, when I was a kid. We took a cardboard box, insulated it, painted the inside black, and used aluminum foil to channel the light into the box. We placed a pot of raw meat and veggies into it, to SLOWLY cook in the sun. At the end of the day ... Pot Roast cooked in the sun!

I did get enough of them, to gain an appreciation for them.

Most pot roasts I've had were large and soft pieces of meat, often in some kind of slightly thickened jus, and loaded with potatoes. This pot roast is similar, but with "faux"tatoes, instead!

The method is essentially searing a piece of meat, throwing it into a crock-pot with some veggies, herbs and red wine. Leave it alone for 8 hours. Return and add cauliflower, pushing it down into the jus. Let it sit for 20 more minutes. Serve!