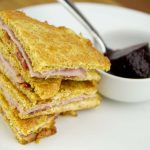 This one kind of makes me chuckle.

I low-carbed for years, without a functioning microwave. Thus, I'd never had a "one-minute muffin". I knew of them and completely respected their popularity, but I'd simply never had one. I had no way to make one! Finally, I moved into an apartment that had a functioning one. It finally occurred to me that I should give one a shot! I did! It was everything I'd ever hoped it would be and more! The first one I had was simple, with just a bit of sweetener and cinnamon. Heaven in a minute! I tinkered with it and finally made the cheddar rolls, which I used on sliders.

Then, one day, just sort of playing around, I had this desire for a deep and greasy, fried pork sandwich. I don't know why. I just wanted something wonderful and amazing, but that felt bad ... dirty ... wrong. What I came up with is nothing short of spectacular right! It's little more than a blend of basic square one-minute muffin, which is then split it half, loaded with a bit of ham and crispy bacon, and then dipped into an egg bath. From there, it's fried like French toast!

Note: Photos are taken with a side of sugar free jelly.

The Rest of the Fixin's