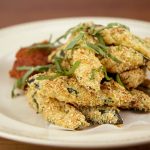 These baked zucchini fries are probably incorrectly named. They're not "fried". In fact, there's no oil used! That's not to say they COULDN'T be fried, it's just that they weren't, which means the name is ... the wrong name. Maybe "Baked Zucchini Bakes". That probably makes more sense, from a literal and redundant standpoint, but I'd wager that less people would order the Zucchini Bakes at a restaurant, than would order the "Zucchini Fries". If you're wondering what my point is ... so am I! I just started writing and this is what came out.

These Baked Zucchini Bakes were wonderful! They were crisp and flavorful, without taking on that soggy and squishy zucchini texture that they can so quickly and easily take on.

As with any stick-like food, a dip is often sitting on the side. More often than not, it's ketchup. I didn't want to just throw a puddle of plain ol' ketchup on the side of these crispity beauties. I wanted to do something a little different. So, they are accompanied by a sun-dried tomato pesto.

They're a little messy to make, but they are A LOT of fun to eat. You can also make the up, stick them in the freezer on a tray (raw), freeze them, place them into a big freezer bag and freeze for another day. Pull them out, line them on a tray and bake them up! YUM!
Prep Time15 mins
Cook Time15 mins
Total Time30 mins
Servings: 4 Servings
Calories: 409.3175kcal
Author: DJ Foodie