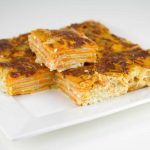 Before I say anything, I should point out that this recipe is higher in carbs than most of my recipes. If you're deep in ketosis, or working on induction, you might want to look away. LOOK AWAY! This recipe will grab you and suck you in. Before you know it, you'll be in the store, jumping into that big pile of sweet potatoes in the produce section, much in the same way your kids jump into the giant tub of balls at Chuck E. Cheese.

This recipe is here because not everyone eats as low as I do. I recently asked on Facebook what the carb levels of my readers were. About half were within ranges similar to my own, but the other half had a higher capacity for carbs. This is for them. There are ALSO times where I'll up my allowance for the occasional splurge. Planned departures, in my opinion are good, fun, delicious, remind us that we really can eat anything (as long as it's got its place, within a grander plan) and FINALLY, it keeps the body guessing! A third reason this is here is for company. Let's face it, the Standard American Diet (SAD) tends to include heavy amounts of starch (ie. steak and potatoes). I believe the USDA (wrongly, in my opinion) recommends we get something upwards of 65% of our daily calories from carbohydrates. Because of these recommendations, there are certain expectations of a meal, and by extension, the host! It becomes a bit of a challenge to offer a borderline mandatory starch, in a world without starch! This is one of those low-carb starches that NO one will scoff at. They will, in fact, ask you for the recipe.

Give it to them!

I love sweet potatoes. I think they're amazing in just about every way I've ever had them. In this case, I've paired them with celeriac. This is done for two reasons. 1. I like the color contrast of the two colors alternating in the slices. It's purdy! 2. Celeriac is lower in carbs than sweet potatoes, but tend to get a bit lost in the flavor. As a result, it lowers the carbs of the dish, while carrying the flavors and textures of the sweet potatoes (as well as the luscious cream and cheese!). ☺

In terms of flat out flavor, this is 10 out of 10. I'm usually fairly critical of my recipes and do my best to portray them honestly, and as I see them. This is probably in my top 10 of all recipes across my site. It's a treat to die for, but ... that's just it. It's a treat.

Note: I used a mandolin to cut the potatoes really thin. You could do this with a knife, but be careful and keep the slices as thin and consistent as possible.
Prep Time20 mins
Cook Time1 hr
Total Time1 hr 20 mins
Servings: 8 Servings
Calories: 331.14kcal
Author: DJ Foodie