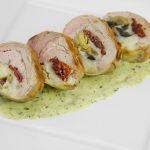 This recipe is absolutely tasty, but it's also a strange recipe. My original challenge was to take an inexpensive cut of meat and do something interesting with it. While I believe I COMPLETELY succeeded on that account, this recipe is also a bit of a stretch.

I purchased two turkey thighs. With the first, I created the Bacon Wrapped and Sausage Stuffed BBQ'd Turkey Thigh recipe. For the second, I wanted to do whatever was the opposite of the smoky thigh. The BBQ'd thigh was cooked low and slow in a smoky environment, was full of spices, wrapped in bacon and just ... a really excellent down and dirty recipe. To steal a term from GrassFedGirl, it was "amazeballs!"

This time, I wanted something a little more refined. A "snobby" turkey thigh, if you will. I chose to go with some Mediterranean flavors and make it sort of a northern Italian type of dish. The end result was thoroughly delicious, rich and flavorful, but ... for some odd reason, I decided to wrap the whole thing in caul fat.

It can't be a big secret that I love wrapping things in bacon. I wrapped the BBQ'd thigh in bacon and this was to be the opposite of that. So, what's the opposite of no bacon? In my mind ... it's caul fat! It's like wrapping food in bacon, but ... without bacon!

Caul fat is a thin membrane, which surrounds the stomach internal organs of some animals, like cows, pigs and sheep. It's the weirdest looking stuff; appearing like a big webby net. I happened to have some left over in my freezer from Thanksgiving, where I had wrapped various turkey parts in it and served it to my family.

I flat out stole the above image, but I liked the picture. It does a fantastic job of showing what caul fat looks like, while being held by a regular person (not a chef), who ALSO used it for Thanksgiving and a turkey. If you click the image, you'll also see she goes into a little more detail about caul fat than I did. She also calls herself the "Pig Whisperer" which automatically makes her awesome, in my book.

See, one of the wonderful things about caul fat is, it essentially disappears when it's cooked. You can take something like a meatloaf and wrap it in caul fat and then bake it. The meatloaf will maintain its shape, because the caul fat helps it to stay that shape. However, the caul fat essentially melts IN to the meatloaf, rendering it extra flavorful and juicy! It does almost all the great stuff wrapping stuff in bacon does, but ... without the bacon! (and salt and smokiness)

Caul fat is great. It's fun to wrap around monkfish or meatballs. Find some and play with it. It's weird, but fun!

It's unlikely you'll find this at a standard grocery store. If you call ahead, you might be able to order some. The first butcher I called in Seattle had some in the freezer. It's far from impossible to find, but it's not going to be sitting next to the bacon.

Finally, caul fat freezes well. Defrost in a bucket of water and just pull it out of the water and spread it out. Cut a big sheet of it, put something in the middle of the sheet, roll "it" up in the caul fat, then cut off any excess. Sear and roast! YUM!