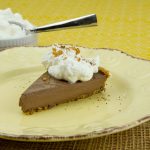 Gelatin might be some of the weirdest stuff on earth, right up there with Aerogel and non-newtonian fluids (ie. cornstarch slurry). In simple terms, it's what gives Jell-O its shape and jiggle. It's usually bought in powdered form, but can also be bought in little sheets that feel like plastic. Dissolve these powders or sheets into a warm liquid and then let it chill. It will firm up the entirety of the liquid and become a jiggling gelatinous mass of bouncy wonkiness.

I first learned about using powdered gelatin back in culinary school, somewhere in the middle of the 19th century. I learned how to apply it to meats and fishes; an interesting branch of cookery known as "charcuterie". Gelatin was used to firm things up, give shapes to meats and sauces that have no shape, suspending ingredients in "space", etc.

Gelatin was fun, but ... old school and I never really used it in modern kitchens (of the early 90's), but I think it's seeing a bit of a revival.

A little while back, I was trying to think of induction friendly dessert recipes and thought Panna Cotta would do the trick. Panna Cotta is little more than sweetened cream, held into a molded shape with gelatin. That day I made all sort of other desserts, but the Panna Cotta was the clear winner. This got me to thinking about gelatin and all its applications. It can really be applied to anything with water in it: sweet OR savory! A little gives you a little structure and jiggle and a lot will give you something firm and solid! It is odorless and tasteless. So, it's little more than a gel, which would work in a glass of water, a bowl of ginger infused chicken broth and freshly suspended cilantro leaves, as well as strawberry juice and cocoa powder mixed with cream and almond milk.

So, what is it? Where does it come from? You really probably don't want to know ... (short answer: animal skins, bones and connective tissues).

Since the panna cotta, I've been playing a lot with gelatin, making loads of different jiggly things in my spare time. Here is one of the first to hit the website. I jumped it up ahead of some of the others because of a photo on Facebook, where I was caught dropping the pie. Seemed only fitting to share the recipe quickly!

This recipe is VERY simple to make and really doesn't use that many ingredients. The end result is deep and luxurious, without really breaking the carb bank.

Nut 'n Honey Note: I use a little bit of honey in the crust. It's a tiny amount and really only serves to help the crust stay together. You could completely omit it and the recipe will still work, while also dropping each slice by about 2 net carbs. However, the crust will not stay as "together and united". It will still work and be absolutely tasty, but it will be more crumbly. It's totally up to you!
Prep Time20 mins
Cook Time15 mins
Total Time6 hrs 35 mins
Servings: 8 Servings
Calories: 404.8775kcal
Author: DJ Foodie