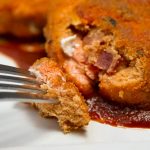 I grew up on salmon patties. They were DEFINITELY a favorite of mine, growing up. If I had to hazard a guess, I would imagine that the patties I was raised on came from canned salmon, breadcrumbs and maybe mayonnaise, swirled in a pan, patted into pucks and then fried in some kind of vegetable oil. Whatever they were, they were loved, appreciated and then dipped into seemingly bottomless puddles of ketchup. Mmmmmm ....

These salmon patties are made with fresh salmon and omit the breadcrumbs. However, because I know that breadcrumbs are such a big part of my fondness for these flat, fishy discs, I wanted to emulate that bulk and texture. Enter the pork rind dust!

In short, pork rinds are fried and puffed pig skins, which are usually blasted with some kind of salty flavor dust. You'll usually find them in most grocery stores in the snacky section, with all the other stuff you're pretending isn't there. Just look for the pork rinds. They're delicious! Sort of the low-carbers' fauxtato chip! If you take these same packaged pork rinds and throw them in a food processor and pulse it a few times, you'll get something that very closely approximates bread crumbs!