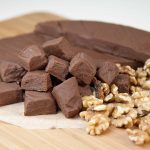 When I was a kid, we would travel into Gold Rush territory and visit a historic old town called "Columbia", in California. Aside from the crazy rock gardens formed by mining methods and the local "Moaning Caverns", one of my favorite things to do was drink Sarsaparilla and eat handmade fudge. YUM!

This fudge recipe is interesting. It's actually made in a manner very similar as most fudges. It is heated to a "soft ball" stage, and then cooled, where it hardens to the texture of fudge! The only fudge I've ever had had a somewhat grainy effect, from the crystallized sugar. THIS fudge is no different. The erythritol re-crystallizes and creates a grainy/gritty texture. It's not at all unpleasant, but it's not a "smooth" fudge. Also, for anyone familiar with large quantities of erythritol, there is a very mild "cooling" sensation that occurs, when eating it. I've never really noticed it before, but it's noticeable in this recipe. To be perfectly honest ... I kind of like it! It's like an air conditioner ... in my mouth!

Finally, this fudge was INCREDIBLY sweet. Sickeningly sweet. This is part of the allure of fudge for a kid, but as a grown-up, it was too much. In retrospect, I would've thrown a cup or two of chopped walnuts into it, prior to cut the sweet. (included in the recipe, as I feel it's somewhat necessary)

Note: I used a sugar equivalent called "Swerve" for this. It did work, but ... it also re-crystallized. I suspect this wouldn't work with something like Splenda. It also wouldn't work with liquid sweeteners or pure stevia.
Prep Time5 mins
Cook Time20 mins
Total Time6 hrs
Servings: 12 Servings
Calories: 123.80166666667kcal
Author: DJ Foodie