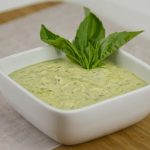 There are very few things I love more than pesto. Pesto can only really be heightened by the addition of cream. Ohhhh ... cream. I often feel as if I could float through life on a green cloud of pesto cream. The bad news is, on occasion, I really try to!

The good news is, pesto cream is really really easy and it's really that good. The BAD news is, it's like a rock solid wall of calorie bomb. By and large, I don't count calories, but there are some foodstuffs which are so calorically dense, it becomes a bit irresponsible on my part not to point it out. This stuff is as good as it as genuinely fattening. Normally, I recommend fat and fat bombs, but ... within reason. The issue that I PERSONALLY have with pesto cream is that I could drink it from a lavish Goblet all day and never grow tired of it.

Portion Control: Recipe makes about 1 cup of sauce, for about 1/4 cup per serving. Any less and it just feels like a tease.