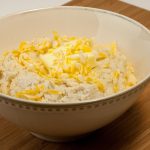 Grits are corn. No two ways about it. Corn is mostly frowned upon within a low-carb way of life, due to the sugar and starches they contain, in abundance! This makes me a bit sad, in that I happen to LOVE corn, going so far as growing my own, once upon a time!

Then, a while back, I discovered there was a low-carb version of hominy, which results from the heirloom variety of corn being used and the treatment it undergoes. Somehow, this results in a tasty corn based product, which is approximately 4 net carbs per half cup. You can read a little more about the history of this findings in my Pork Tamales recipe.

Anywhooo .... grits come from a Native American origin, where it was ground. It is more likely known as a Southern US breakfast food; something like porridge. This is what we have here. This stuff takes the PERFECT place for what you used to call "a starch". Imagine some shredded pork on top of this, with a side of broccoli. OH ... YUM!

Note: I used a mixture of half almond meal and half pureed hominy. You COULD just use the straight hominy puree, but I find it holds together a little better with the almond meal, while additionally dropping the carbs per serving. Choose your own adventure!