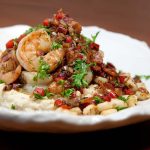 This oft served breakfast dish was one of low-carb's "forbidden fruits" in my mind. It's one of the most luxurious and comforting foods I know of, and I'd long assumed it was out of my life, more-or-less, forever. Grits, being corn, and corn being evil, I seemed destined to live a grits-free life. I've been sad. Alas, that is not true! Read on!

I've lived all over the United States. I've driven across the country several times. I've driven up and down the west coast. I've visited both Alaska and Hawaii. I've driven from Maine, down to Washington DC and back. I feel as if I've got the US pretty well covered ... except ... the South East! I've never been to New Orleans. I've never been to Tennessee, or the Carolinas, which is where this particular recipe originates from. Also known as the "Low Country", this South Carolina/Georgia coastline dish. The food in the region is SIMILAR to Cajun and Creole, but with its own regional variations.

How do I know? Thank you, Wikipedia! ☺