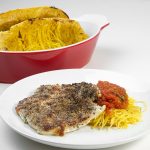 A few months ago, my mother sent me the recipe for Chicken Piccata and said it was a favorite of my fathers. The recipe was actually my mother's twisting of Giada de Laurentiis's, which is, itself, probably a twisting of Veal Piccata. In any event, I tinkered with it to make it low-carb, then added it to my site. It was really quite popular! SO popular, in fact, that I went back and asked my mother for another suggestion. This time, she came back with Parmesan Crusted Chicken {Hellmann's Mayo Recipe}, which is, itself, a twisting of the recipe from Hellmann's recipe.

Here we have my re-tooling of THAT particular recipe!

Because there is so much fat from the mayonnaise, I decided that it's a super juicy and flavorful recipe, no matter how you slice it. So, I chose to butterfly it. This will allow it to cook that much faster and give a little more surface area for the toppings. It also just makes it look like a much bigger portion that it is. Optical illusion!

Also, because breadcrumbs are considered dark and evil within a low-carb landscape, I needed to replace them with SOMETHING. It's so common for people to use almond meal, in place of flour and/or breadcrumbs. I decided to go with hazelnut flour for 2 reasons: 1. I frankly prefer the taste and 2. to be different. NORMALLY, I LOVE the way hazelnut flour works in recipes, but ... in this instance, the end result was a bit of a speckled mess. It was absolutely delicious and was devoured within seconds of the photo being taken, but I confess to not loving the appearance of this particular chicken recipe. It looks like someone dropped it at the beach. A lighter almond meal, or even crushed pork rinds, will certainly yield a more attractive chicken dinner, but I'm not convinced that it will TASTE any better.

No matter what you do, though, smothering seasoned chicken with mayonnaise, parmesan cheese and almond meal, hazelnut flour or pork rinds, the end result will be a luscious taste explosion!

Photo Note: The photos are taken with Roasted Spaghetti Squash and Marinara Sauce.