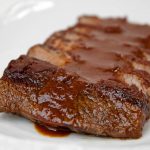 What we have here is my third stab at a slow cooker recipe. It is, in fact, also the third time I've ever used a slow cooker in my life. As of this writing, I've actually created about 7 recipes, but these notes are about the third one.

So far, it's been my observation that extra liquid isn't necessary in just about every slow-cooker recipe that I've read. It's my belief that this liquid is usually added so that the ingredients are "submerged", which seems intended to make the slow cookers "feel good". However, in the end, this tends to create a big puddle of watered down dinner.

I'm not an expert with these things, by any stretch of the imagination. However, let me explain a little bit about what I feel is happening.

Most all ingredients contain some amount of water. When you heat them up, portions of the water are released. In reality, you don't even necessarily need heat. Salt, for example, will also pull the moisture out of an ingredient. Interestingly, so does water (and the nefarious sugar!), but ... we're trying to limit the amount of water (and sugar!), not increase it.

"What about the first view hours, before the liquid comes out?" you might ask. The slow cooker is pretty hot under that lid. Foods suspended by other ingredients are still getting large blasts of slow and consistent heat from being within a hot and moist environment. Water vapor is all around your ingredients and cooking everything right along! I DO feel there should be at least a very small amount of liquid on the bottom, to just get the ball rolling, but ... only a tiny amount. More will follow!

I suggest reducing the amounts of water in any future slow cooker recipe you might have. I think you'll find it results in more flavor and a slightly more moist and tender product!

Anywhoo ... in this case, I wanted to go with what I think Slow Cookers are used for, anyway: ease and simplicity. This recipe has really has only 2 ingredients, takes only a few minutes to sear the meat and ... 8 hours later ... you're done! YUM!
Prep Time15 mins
Cook Time8 hrs
Total Time8 hrs 15 mins
Servings: 8 Servings
Calories: 844.35kcal
Author: DJ Foodie