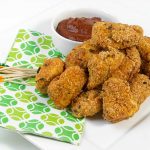 Here's a fun one, and one that's likely to delight the whole family! I had some friends over when I made this and asked them to honestly tell me if they could tell that they've been de-carbed. They all agreed that there was no lack of flavor and that they were as good, if not better than, the real carb-full thing.

These are a bit messy to make, but I agree with my friends. They were outstanding. In fact, I was frankly caught a little off guard by how wonderful these little chicken nibblets turned out to be. They were golden brown, flavorful, had a spectacular texture and were full of moist and juicy goodness.

Normally, the procedure for breading and frying would be dredge in seasoned flour (to help the eggs adhere to the "goodie"). Then, it would go into an egg bath, followed by being dredged in a seasoned bread crumb mixture. From there, it would be fried (usually in some kind of vegetable oil garbage).

We're going to right several of those wrongs, by eliminating wheat, an overwhelming majority of the carbs and then fry them in a healthy, stable, high temperature fat.

Dredge Note: I REALLY thought about dredging these in coconut flour, prior to placing them in the egg bath. It would have made them very very slightly "sweet", but... virtually undetectable in flavor. The idea was to help the eggs and almond meal/parmesan mixture adhere to the "nuggets" with a little more intensity. I opted to go for a more pure Mediterranean flavor and skipped that step. It turns out that it wasn't necessary!