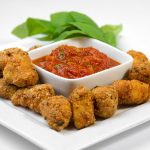 Here's something I didn't know! Marinara sauce, to Americans, is kinda-sorta not really properly named! In most all other countries "Marinara" includes seafood! (hint hint: marine)

Because this site isn't totally geared for American audiences (even though about 90% are from the US), various UK, Australian and other English speaking countries (not sure about Canada ... they might call it the same thing as the US). Hey, Canada! Does the word "marinara" invoke thoughts of seafood, or the dipping sauce that goes with your mozzarella sticks? Inquiring minds want to know!

The sauce that most Americans know as "Marinara" is actually more in line with "Neapolitan Sauce", harking from Naples, Italy. Funnily enough, if you were an American in Naples and asked for "La Salsa", you'd get Marinara!

It's sort of like how every other country calls soccer "football", except the US, where we have an entirely different game we call football.

Back to the story at hand ... Napoli Sauce is basically a tomato based sauce, cooked with tomatoes and onions. That's about it!

Sometimes legends lie. The reality is far murkier, with the first actual "printed" mention of San Marzano Tomatoes appearing in an American agricultural book put out by the USDA mentions them in cans, in 1894. In 1902, some Italian documents mention that they are a cross between 3 other varieties: King Umberto, Fiaschella, and the Fiascona.

What IS true is that true San Marzano Tomatoes are grown in the volcanic soil of Mount Vesuvius near Naples, Italy. They are harvested when ripe, as the sun goes down. They are sweet, fleshy, high in pectin (thicker sauces), low in seeds, bright red and easy to peel. Oh! And, they look like an elongated Roma Tomato.

The primary reason for San Marzano Tomatoes being such a big deal is, they are reliable and delicious. When it's not summertime and amazing local tomatoes are not available, these sweet tomatoes, canned at their absolute peak, are the way to go. Many Chefs will do a little happy dance for the real thing. For TRUE San Marzano Tomatoes, from Italy, look for the DOP seal, indicating "Designation of Origin". Seeds have travelled outside the region and are also canned, but they are not grown in the same soil, or picked by the same standards. So, while many canned "San Marzano Tomatoes" are actually spawned from the same seed ... they are not the same thing. Buyer beware.

Two suggestions for purchasing online ... Strianese Whole Peeled D.O.P. San Marzano Tomatoes – These are true canned tomatoes, imported from Italy. As of these writings, they are $10.40 US, per can. YIKES!

Carmelina 'e San Marzano Italian Peeled Tomatoes in Puree - This is what I use. These are from the same source, have no added flavors and are packed in puree, rather than sauce. The end result is tasty, sweet and not watered down. Sure, they're not TRUE San Marzano's, but they're close enough and at less than $3.00 US per can, I'm willing to sacrifice a tiny difference in quality ... for a canned product.