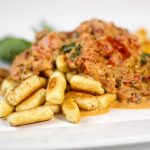 Here we have gnocchi (nee-yo-kee). Gnocchi is a favorite of mine, going as far back as childhood. These soft Italian dumplings always hit the spot, tossed simply with marinara and cheese. Within a low-carb way of life, I'd long assumed that gnocchi had vacated my future. Then, without really meaning to, I discovered "ricotta gnocchi".

Most all gnocchi I had growing up was a mixture of mashed potatoes, flour and eggs. This was formed into a dough, then little dumplings, which were then boiled. Over my career, I've seen different flavors and methods employed, including boiling, frying, broiling and the use of sweet potatoes, beets, spinach, nuts, etc. Every variation I'd ever heard of used flour in some way. Flour is a no no within a low-carb lifestyle.

So, what's this ricotta gnocchi? Interesting! Turns out, it's basically ricotta mixed with flour and eggs. My shoulder sank. Bummer.

Then, I found a reference to a pure ricotta variety, stemming from the Zuni Café cookbook. (Zuni Café is a famous restaurant in San Francisco ... the best hamburger on earth!)

Here's a link to the recipe I followed. My master plan had been to follow this recipe, but dust the final dumplings with parmesan cheese, rather than flour. This would work and would be significant enough of a change to warrant a new recipe!

Starting with a store bought organic, expensive, high-end ricotta (rather than making my own), I put it in a strainer over a bowl in the fridge and let it drip-dry for 24 hours. I really wanted to follow the recipe to a T. Once the ricotta is dried, the rest is fairly easy to follow along with.

I followed along with the recipe, tweaking, twiddling and twoddling, until I finally had something like a batter. I tried to form dumplings, but ... it was too loose. I refrigerated the batter to see if it would firm up. It didn't. Finally, I decided to see what would happen if I carefully dropped some batter into a pool of very hot, but very still, salted water. Imagine every molecule in the gnocchi being upset with every other molecule. When given the chance to run far far away from everything, they do. This is what adding the batter to the water was like. Everything went every which way, resulting in a pale white water, with nary a gnocchi in sight. I was beyond frustrated!

Then, I remembered the Instant Mashed Potatoes that had been kicking around my cupboards. LC Foods had mentioned on their Facebook page that they'd send free samples to people willing to try them out. I submitted my info, and they immediately sent me the stuff (also some tasty trail mix!). I was energetic enough to get the free mashed potatoes, but ... a good month went by and I never tried them. I had been attacked with a severe bout of laziness.

I dug the potatoes out of my cupboard, measured a cup of it, mixed it in and tested it in water. The outer layer very briefly tried to run away from every other part of the outer layer, but then it all miraculously hung together, sank for a moment, then came bobbing back to the surface after about 1 minute. I let it cook for about 4 more minutes and then pulled it out. It was soft, but ... it held its own. I tasted it. YUM!

In the end, I was a little worried about the taste, because I've had a bad experience with instant mashed potatoes in the past. However, these were AMAZING. They were light and delicious, with precisely zero of the strange flavors stemming from other low-carb instant potatoes that I've had. Well done, LC Foods!

Forming Note: The are a few ways to form these. You can do it by rolling long logs in parmesan cheese, then cutting the logs into smaller dumplings. You can use a spoon and drop each dumpling into grated parmesan. You can also use a very small ice cream scoop for it (chances are, you won't have this, though). Here's what I did: I put the dough into a pastry bag, without a tip. I also set up a platter with freshly grated (the finest grate) parmesan cheese. Then, I placed the pastry bag in one hand, with a steak knife in the other. I extruded the dough out of the tip, while using the steak knife to cut the dough-stream every inch. This created a quick succession of small inch long cylinders, each dropping into random spots on the parmesan. I did this until I was out of dough. I tossed it in the parmesan to make sure it was evenly coated, then refrigerated it for about 30 minutes. The rest is in the recipe!