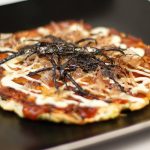 This is a strange recipe. It's a strange Japanese Pizza-Pancake, called "Okonomiyaki". (Oh-Koh-Noh-Mee-Yah-Kee) The word is a combination of two words Okonomi+Yaki, meaning "What You Like" + "Grilled".

My little brother attended college in Tokyo. He continued to live there for about 3 more years. This is where we were introduced to Okonomiyaki. I'd never heard of it, prior to visiting my brother in Japan. Okonomiyaki is basically pancake batter, mixed with eggs, cabbage, pickled ginger and scallions. Then, different fillings are selected and added, such as: pork, shrimp, cheese, kimchi, etc. This is all blended together and then poured onto a hot surface to cook, much like a large thick pancake. It is then brushed with Okonomiyaki sauce (kind of like BBQ sauce), Japanese mayonnaise, bonito flakes (thin shaved dried fish flakes) and seaweed flakes.

My family loving refers to it as: Ohmigawdwhaddizit!

When I think about Okonomiyaki, I'm somewhat reminded of "quiche". Quiche, to me, is where leftovers, the little cheese ends and partially chopped up vegetables roaming around my fridge all wind up on weekends (now more as crustless quiches/frittatas). These little egg pies are a wonderful way to glue all those ingredients together for a hot, seemingly fresh breakfast delight!

I see Okonomiyaki in much the same way. It's a random and always changing collection of ingredients, which are folded into a batter, then cooked on a flat grill-top surface. In my eyes, it's the Japanese equivalent of leftover pie!

When I made my little mini-crab cakes, I felt like I'd found a new way to make Okonomiyaki, as well! I started thinking about it, and arrived at what follows. Being quite proud of my idea, I invited my brother over to try out my Okonomiyaki. I think he was impressed by how it turned out. He definitely said that it looks just like it would in Japan. He took his plate and gobbled it up!

In the end, he described it as the worst Okonomiyaki that he's ever had, sad to say. However, it's also not a "true" Okonomiyaki. He liked it and ate it, but compared it to the real thing ... in Toyko. This is not that. This is a low-carb imitation and one that, while it's the worst my brother has ever had (SNOB!), is still quite delicious in its own right. I certainly enjoyed mine!

Note: One of the steps calls for laying thin slices of pork belly over the uncooked side of the pancake. I have a large Asian grocery store in Seattle and was able to pick up some thin slices of Kurobuta pork belly. This is lean and uncured. However, thin strips of a raw low-sodium bacon will work just as well!
Prep Time15 mins
Cook Time15 mins
Total Time30 mins
Servings: 4 Servings
Calories: 886.4275kcal
Author: DJ Foodie