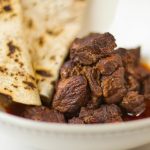 Chile Colorado (red chile) is something that actually stems from the Old West, back when "Cookies" made chow from the chuck wagon for the cowboys. It's a deep red chili that cattlemen ate while driving herds around the southern US and northern parts of Mexico. Dishes existed similar to the modern Chile Colorado in this area, before it was U.S. territory. The Europeans later brought spices with them, which were infused into the indigenous foods, resulting in the chuck wagon version, as well as today's slow cooker varieties.

It's firmly Tex-Mex, but has roots in Spain, Mexico and India, believe it or not!

Thickness Note: Even without the addition of extra moisture, this was still a bit soupy. In the future, I would add about 1/4 cup of peanut flour to the mix. This will help thicken it up with flavors that would complement such a dish. Alternately, you can remove the lid from the slow cooker for the final hour and let some of the water evaporate. This will thicken the sauce. Finally, you could strain the meat through a colander, then reduce the sauce in a separate pot, later adding it back to the meat. I left it "as is" in an effort to simplify the recipe. "As is" was quite tasty, but I was left feeling like I'd like a thicker sauce.
Prep Time30 mins
Cook Time8 hrs
Total Time8 hrs 30 mins
Servings: 8 Servings
Calories: 461.945kcal
Author: DJ Foodie