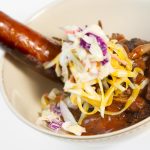 A little while back, I posted a recipe for the real deal, low and slow, smoked pulled pork butt. Right around the same time, I'd been to a fantastic food truck in the Seattle area and had a "burrito bowl" (basically a big salad LOADED with Carnitas!).

As I was writing my notes for the pulled pork recipe, it occurred to me that a BBQ Pork Bowl seemed like a totally reasonable proposition. I even commented about it ... in the notes!

Within days of posting the original recipe, I got a haircut from Pamela Ann, a reader and follower of my nonsense. She'd just sent me a photo of the pork SHE had made, following my recipe and sent me a picture. When I set up the hair cut appointment, she promised me a plentiful pile of properly pulled pork. Wow, does she know how to get me! Pulled Pork ... for me ... is one of the very few things on life that can give bacon a run for its money.

Here's the photo Pam sent me:

After getting my hair cut, I came home with a BIG bag of amazing smoked and pulled pork. I stopped at the store and picked up some cheese, coleslaw mix and a package of hot links. I returned armed with everything I would need for my BBQ Pork Bowl.

The bowl was as tasty as you'd imagine ... and then some!

Note: After I saw the photos and showed them to a few friends, there were comments about the appearance being a bit ... "R-Rated". At the time, I was just in a hurry and threw stuff into a bowl. In retrospect, I would've split the hot link into two halves (butterfly'd it), then cooked it, and topped the split link with the goodies. More of a BBQ Pork BOAT or a BBQ Pork SPLIT than a bowl, but no less delicious. Next time! Now, get your minds out of the gutter and simply enjoy a tasty dish. I know I did! :)
Prep Time10 mins
Cook Time10 mins
Total Time20 mins
Servings: 4 Servings
Calories: 996.7725kcal
Author: DJ Foodie