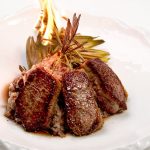 This is a Valentine's Day Recipe, with a very special message. It falls under the category of "Romantic Recipe".

On its surface, this recipe is about as simple as it gets. It is little more than thin slices of lamb loin, skewered with rosemary stems, seasoned with a bit of salt and pepper, then seared on both sides. That's it! It's simple, but flavorful and attractive. It would go nicely with just about any vegetable!

What makes this dish special, is its flame; more importantly, its smoky aroma ... its spirited musk.

Have you ever been walking down the street, in a foreign city and picked up a wafting odor from a neighborhood bakery? You were immediately taken to the small bakery you'd visited with your family, outside of the Grand Canyon, when you were younger! Has this ever happened?

Have you ever had someone walk by you in a restaurant, and have their perfume perfectly match your employer from 10 years ago? Even though you hadn't thought about that individual for 9 years ... there are you, facing the old hag. There you are ... there she is, as if no time had passed. Aroma and memory ... locked. Thoughts from years' past; unlocked and brought to the forefront of the mind.

Have you ever caught the odor of something that took you away to that place ... that time ... with that person ... in that magic moment ... ?

The sense of smell is a far more complicated sense than that of vision, where we have only 4 different kinds of light sensors in the eye. For the sense of touch, we can feel pressure, temperatures and pain. For taste, we have 5: salt, sweet, sour, bitter and umami. But ... there are more than 1000 different smell receptor types, which change and regenerate throughout our lifetimes, based on our surroundings and what we're accustomed to smelling! This complexity affords us the ability to discern and discriminate many thousands of different aromas, most of which we do not have names for. We know how to describe the things we see, the textures we feel, or the tastes we savor, but ... our vocabulary is no match for the spectrum of aroma that we are capable of.

The sense of smell is the oldest sense of them all. Even bacteria have something similar to smell. It's a method of knowing what chemicals are in the air or water around us. Smell is processed in the human brain in the "olfactory bulb", which is located right next to the hippocampus, a part deep inside the brain where information from all over the cortex converges. The hippocampus is vital for creating new "episodic" memories throughout one's lifetime. People with a damaged hippocampus have trouble remembering what has happened to them, even though they may be able to learn new skills and facts.

As if proximity of the olfactory bulb to the episodic memory making hippocampus deep in the brain wasn't enough, there's also the whole fact that aroma directly enters the brain. Vision stops at the surface of the eyes. Or touch, on the surface of the skin. These senses additionally travel through a relay station called the thalamus, before continuing on, into the brain. Smell doesn't have this little side trip. No pit stops. Straight into the brain it goes!

Smells are deep and old and wired closely with memory and the world around you.

This particular dish is less about the simplicity of its tantalizing flavors and more about creating a moment in time, where the creation of a new memory is discussed and shared between two close people. This is a dish where time should stop for a moment, as a thoughtfully prepared serving of lamb is served to your beloved ... and ignited. Both should inhale deeply of the smoke and rosemary vapor. Both parties should focus on that place in time, that moment, that perfect time capsule, where you are together ... breathing, allowing this episodic memory to form; stay aware of one another as the flames twist and writhe and slowly dwindle, leaving nothing more than a few toasted scraps of rosemary carbon.

This simple little dish is about creating a future moment, somewhere in the random distance. You walk into an old antique store. The elderly man behind the counter is burning a twine wrapped bundle of rosemary twigs ... and you are taken back to that time and place, where you were with your beau and you were ... in love.