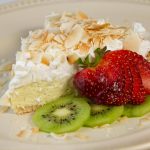 In the late 90's, I worked at "Dahlia Lounge" in Seattle. There were 3 things that flew out of the kitchen almost faster than we could make them: potstickers, crab cakes and ... coconut cream pie.

The "plating" in the final picture was almost a spoof of the same coconut cream pie that would get served out of that fine dining establishment in the late 90's. I suspect if I were to return today, I'd still be able to order this gem of coco-nutty goodness.

I have to say that I'm really proud of this sugar free/gluten free recipe. Most coconut cream pies are filled with custard, but a custard which is "held firm" with either flour or corn starch. I also had the daunting task of creating an "alterna-shell", without flour. I was incredibly nervous that it wouldn't work, or that the custard filling wouldn't hold. I was concerned that the crust would just disintegrate. Oh, how I worried!

My concerns were all completely unfounded.

The end result of this challenge? This sweet fluffy gem was pure coconut cream pie!

Sludge Note: When making this, the custard took on a very slightly "slimy" viscosity, due to the xanthan gum. I was incredibly nervous that this pie would turn out like a big bowl of ecto-plasm. By the time this thing chilled out, firmed up and got all swirled in with the texture of the coconut and shells ... the slime could not be detected! I really hesitated to mention this. I did so because I wanted to point out that the custard filling may take on a bit of a "slime in a can" kind of look. Fret not!
Prep Time30 mins
Cook Time30 mins
Total Time8 hrs
Servings: 8 Servings
Calories: 648.12125kcal
Author: DJ Foodie