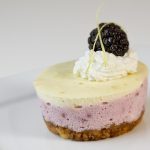 I wanted to play with my Cheesecake recipe. I wanted to make a miniature one (I'm a big believer in portion control. If you make something into portions and stash a lot of them, it's less likely to be eaten in one sitting. A large Cheesecake calls my name. A small one does, too, but the sounds coming from the rest of them tend to be muffled by the inside of the freezer door).

I decided to also layer the better, and make my own crust. This is an "advancement" or an "evolution" over the previous cheesecake.

The crust is just crushed macadamia nuts, butter and a tbsp of sugar free brown sugar. These are slightly par baked. Then, I put a blackberry on the crusts, filled the cups about half way with the blackberry batter, then topped them off with the lemon batter.