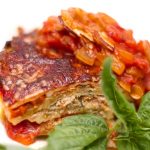 Right out of the gate, I'm going to confess something. Prior to making this dish ... I've never in my life even tasted an Eggplant Parmesan! The idea just never really appealed to me. It sounded like vegetables ... without meat! No bacon? No porky goodness? No thanks. I'll pass!

I'm not even sure why I decided to tackle this particular dish. Maybe because I knew it's been around since eggplants were introduced to parmesan cheese, but maybe it's because I wanted to take something I'd never tried and -- make it SUPER delicious! This is what I've done!

As usual, when researching a dish like this, I need to understand the "lay of the land". In general, it seems as if its slices of eggplant, which are dipped in eggs, flour and seasoned breadcrumbs, then fried or baked. From there, they are layered with parmesan cheese and tomato sauce and then baked! This all sounded far more appealing than the image of a "vegetarian" dish (no offense intended or implied, but ... I do need to interject with the simple fact that bacon is awesome).

The puzzle became how to do the breaded eggplant, but ... without the breading! I chose to go with a seasoned almond flour, instead of flour and breadcrumbs. It didn't adhere as well, but if I was careful, it stuck well enough! Also, because of the almond flour, this got me to thinking about Romanesco. This made me want to infuse the whole thing with roasted peppers! Perhaps, at this point, I'm crossing Spain with Italy, but ... I dunno. It was TASTY!