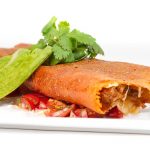 A while back, I created some miniature parmesan cheese cups to use for little appetizers. Around the same time, I came up with an amazing hazelnut cracker. All this got the ball rolling on other things to do with cheese and bowls and chips and dips. I used this trend to look into the topic a little further and stumbled upon a video about a mythological creature known as the "ChupaQueso" ... or "Suck the Cheese" in Spanish. Now, the video is long and boring, but it DOES showcase the cooking method (Part 1 | Part 2).

The really strange part of this particular dish is that ... it's really not a real recipe! It's not indigenous to Mexico and it's not rooted in some lost culinary lore. It was actually invented by a guy named "Howard Tayler" with a web comic known as "Shlock Mercenary". It started as a bit of a gag word, designed to embody all things greasy and cheesey, but with a decidedly south of the border slant to it. It slowly evolved into this cheese crisp thing, as Mr. Tayler began to veer into the land of the low-carb, himself!

If something isn't totally my invention, I like to tinker, tweak and dabble, while still generally preserving the original integrity of the idea. In this case ... I wanted to take what is already a ludicrous concept and elevate it to the redonkulous!

I've stepped it up a notch and have thrown Chorizo into the mix ... dubbing the new invention the "ChupaChorueso" (pronounced "Choopa ChorAYso").

I couldn't stop giggling like a buffoon, as I made this silly thing. Cheese and chorizo stuffed cheese. It's about as indulgent a thing as I can imagine.