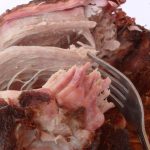 I LOVE Pulled Pork. I was born loving pulled pork. There's just something safe and comforting in a big bowl of soft, moist and tender porky goodness. While it does take a long time, it's also INCREDIBLY easy and almost impossible to mess up!

Beef Brisket tends to be Pulled Pork's more difficult nemesis. Pulled pork is far more forgiving, especially if you leave all the fat and shoulder blade in place before you smoke it. It just seals in all the moisture, which has melted all throughout the muscle. Breaking it apart with a fork ... couldn't be easier.

At its core pulled pork can be eaten alone, almost at weights measured in pounds, not ounces. A personal favorite of mine is topped with a sugar free BBQ sauce and some melted cheddar cheese in a bowl. So ... a BBQ Pork Bowl, if you will ... Hmmm ... maybe I'll make that a recipe. Yep! BBQ Pork Bowl ... coming soon! ☺ (Don't you love how I type these things all stream of thought and what not?!)

If I've learned anything about roasting or smoking a pork butt (the shoulder of a pig, also known as "Boston Butt" ... named after shipping barrels, a few hundred years ago) it's that undercooking it is the crime ... not "over" cooking it (also a crime, but MUCH harder to do). The trick is getting it up to an internal temperature between 195 F and 205 F. The funny thing is, it seems to want to "stall" at around 160 F, in my experience. It was also my instinct to get tired of watching it sit at this temperature for an hour and ... would get impatient and take it out of the smoker, let it sit and cut it up. It was good, flavorful meat, but it was always tough and couldn't be pulled. It was more like a roast than a sublime meaty lump of deteriorating shoulder meat. Eventually, I stuck to my guns and just let it go to 195 F. Shazam! Once it breaks through that wall around 160-165 F, it quickly blasts through the final 35 degrees and turns into a lusciously divine mound of bark covered heaven.

As I read more about this phenomenon, I learned that around 160 F is where all the internal magic happens. All the energy within the pork goes, not to a further rise in temperature, but to the melting and deterioration of the fat and tendons, which then oozes throughout the striations of the muscle.

Note: I was living in Mexico when I made this and was unable to find a standard bone-in pork shoulder. So, if mine looks a bit different than yours ... this is the explanation. Also, the butchers twine was to hold together the strangely butchered lump of pork shoulder that I WAS able to locate. Didn't keep it from being absolutely tasty, though!

Second Note: The high carb count is due to the brown sugar replacement. Feel free to omit this ingredient as it does little more than lend a touch of extra sweetness. Removing it doesn't dramatically alter the recipe and will allow it to drop to near zero-carb levels.
Prep Time20 mins
Cook Time9 hrs
Total Time1 d
Servings: 8 Servings
Calories: 842.6975kcal
Author: DJ Foodie