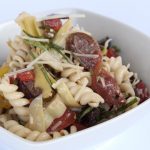 I can't be the only low-carber on the planet that loves pasta. I suspect many also love pasta SALAD. It' s hard to believe you can eat a nice chilled pasta salad while low-carbing ... isn't it?! Well ... you can! (at least most of you can ... some of the time)

Most pasta salads tend to get better as it sits in its juices for a day or two. Because this pasta has a protective matrix that breaks down if overcooked, I wouldn't suggest saving it or letting it "marinate". Make it and eat it fresh. That's the only way I'd trust it not to release too many carbs into my blood stream. Eat responsibly! ☺

Note: I mention chiffonade of basil. It's basically basil that's been cut into strips. You can see the method, here.

Dreamfield's Nutrition Disclaimer: Due to the magic of the fiber coated matrix, a single 56 gram portion is shown as having 5 grams of digestable carbs. However, my recipe system isn't designed to display their nutrition information in the magical way in which they've been able to. As a result, I'm fudging the numbers to show 42 grams of carbs, with 37 grams of fiber. Technically, this isn't true, but it's the only way to have the math display numbers that match Dreamfield's claims.
Prep Time15 mins
Cook Time10 mins
Total Time25 mins
Servings: 4 Servings
Calories: 414.7325kcal
Author: DJ Foodie