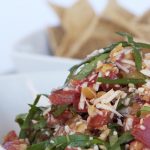 This is the best flavor combination on earth. Shockingly, it doesn't involve bacon or ketchup, either!

It's a wall of tomato and garlic flavor, punctuated with the unctuous cheese, the bright notes of the basil and the texture of the toasted pine nuts. This is the stuff you'll find on the grilled bread at Italian restaurants. It's usually called "Bruschetta".

Now, let me say that ... I have zero recollection where I picked this up. It's just always been in my memory banks. Whoever taught it to me also said, "This is called 'Pistou'. It's like a French pesto." So, I've echoed that same information to everyone I've made it for. Oh, how wrong I've been!

I just looked up the actual definition of "Pistou" and ... it's basically traditional Genovese Pesto, but with the absence of pine nuts. THIS stuff ... whatever you call it ... has both pine nuts AND a healthy dose of raw diced tomatoes!

Again, this is truly a fantastic flavor. This is great as a dip. It's also fantastic tossed with a little pasta (hot or cold). Slather this stuff on a chicken breast and ... you'll quickly understand its allure. Frankly ... give me a spoon ... I'll eat this stuff from a bowl! Whatever it is ...

Note: I mention chiffonade of basil. It's basically basil that's been cut into strips. You can see the method, here.