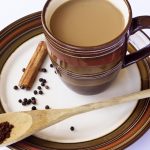 Calling this "Spiced Masala Chai Tea" is something like thrice redundant. It's really just "Masala Chai", but ... it seemed more fun to mix it up. Masala simply means "spice mix" in most of South East Asia, primarily known in Indian Hindi. In a similar naming ... Chai just means "Tea". So ... Spiced Masala Chai Tea is like saying Spiced Tea ... in a few different ways, all at the same time. Good times, huh?

I love Spiced Masala Chai Tea. It's an extremely charismatic tea, with wild exotic scents and powerfully delicious flavors. It's most commonly known as a sweet warm black tea. It's made by steeping spices and tea in milk, sweeteners and water. It's ... yum!

I drink it fairly regularly. Lately, I've been cheating, as I've discovered that you can get a sugar free concentrate ... (if I can't sleep, I'm known to heat up some almond milk, with a touch of the sugar free chai flavoring and ... drink it in the middle of the night). I use the flavor combination for tea, a late night beverage and even ice cream, on occasion. Good stuff!

With something like this, it's always better to use fresh whole spices and grind them up in a coffee grinder (I have a spare grinder that I use for spices and for powdering erythritol ...). I've left the recipe without the requirement for grinding, but it'll have a far more interesting and complex flavor if fresh spices are used, rather than the old spices we all know we've got.

Note: Because most of the ingredients are strained out, I'm only going to count the nutrition for the almond milk.
Prep Time5 mins
Cook Time25 mins
Total Time30 mins
Servings: 4 Servings
Calories: 22.5kcal
Author: DJ Foodie