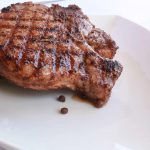 If you've never tried this before ... try it. Right now. Seriously. Get into your car, go get the stuff and come and ... start cooking. You'll be glad you did!

"Jerk" isn't what it sounds like. It's actually a mind melting spice blend from Jamaica. Additionally, it's also a cooking method, but we're not going to cook over a barrel (you can, if you want to, though!). The foundation of a "jerk" seasoning blend is allspice and chilies (normally the scotch bonnet, which is amongst the hottest chili known to man ... OW!). Beyond that, there are many other common spices. The end result is something packed with more aroma and flavor than my mind has ever been able to fully appreciate, much less ... process. It tries, gives up and simply asks for MORE!

This would work for just about any pork chop, thick or thin. Chicken, too!

Brine first? In this case, I used a thick bone-in pork loin chop, which I had brined, first. There's no deep need to brine this, as it's fully flavorful, but ... it will yield a juicier chop. If you do decide to brine it, first, simply omit the maple syrup from this recipe and ... continue at step one, below!

Spice Note: I've used cayenne in this recipe, because it's readily available and probably already in your kitchen. However, if you can find a scotch bonnet (or two, if you dare!), remove the seeds and finely dice it and add. Habaneros would also work. I HIGHLY recommend wearing rubber gloves, should you go down this road ... you'll thank me, later!
Prep Time10 mins
Cook Time20 mins
Total Time30 mins
Servings: 4 Servings
Calories: 696.6275kcal
Author: DJ Foodie