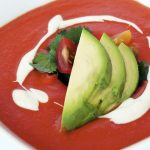 Gazpacho is an ancient chilled vegetable soup hailing ... probably ... from Spain. It's essentially a variety of "peak-of-season" vegetables, pureed raw ... and poured into a bowl! I'll confess to lot loving the "concept" of a Gazpacho. It really sounds like a thick V-8, to me. However ... when it's done right, and the vegetables are truly at their peak, probably bought from a lot farm, or farmer's market, there's a living vibrancy to it, that's just unmistakable. It's a fantastic soup for any summer day!

Most common Gazpachos are a chilled and pureed mixture of tomatoes, onions, peppers, cucumbers and ... often ... bread. The bread helps give it a creamy velvety texture. It's completely unnecessary, however, so ... we're going to leave that out.

Because I'm in Mexico, I'm going to give this one a subtle Latin flair! My recipe is ganished with a light salsa, some cilantro leaves and a cumin crema!
Prep Time20 mins
Cook Time5 mins
Total Time25 mins
Servings: 8 Servings
Calories: 151.4925kcal
Author: DJ Foodie