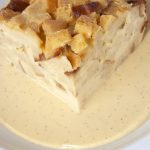 Bread pudding is one of those things that makes my knees wobble. Bread pudding after a meal is the best possible way to conclude one. With too much vanilla custard sauce pooling at the base, I could almost eat a whole pan all on my own. Heat some up for breakfast and smother it in sugar free maple syrup and start your day right! That's how I like to do it!

Once the bread has absorbed the sweetened egg mixture ... bake it. Serve with Creme Anglais (as seen in the photos) or with sugar free maple syrup!