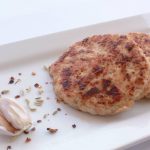 Sausages are basically an emulsified blend of fat and meat, then cooked.

Sausages are meat, which has been blended with fat, in a cold environment (so the fat doesn't melt). This is done in a way that combines the meat with the fat and keeps the meat moist when it cooks, rather than having the fat melt out and leak away, leaving behind a mealy mixture of cooked ground meat. A good sausage has chunks of visible meat and fat, but cooks up solid and moist!

This recipe is a "loose" sausage meat. I use it for all sorts of things, from pasta sauces, to frittata fillings, as an ingredient in my poorly cooked eggs, as stuffing, for sandwich fillings, etc. The list goes on!

Again, sausage is meat and fat. You could go strictly chicken and use the chicken skin ground as the fat. This would work. I'm a big fan of bacon, so I tend to grind raw bacon in with my chicken meat. This is also how my recipe will be written. However, if you want to substitute the bacon for chicken skin ... go for it! Just make sure the skin is fairly well cut up before you grind it.