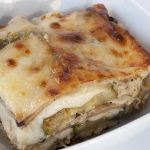 In this case, I'm using a green chicken chili base as the main ingredient within this super cheesy and massively flavorful casserole. I live in Mexico. As a result, the local CostCo carries big bricks of Queso Asadero, which is a spectacular melting cheese. The flavor is so warm, salty and inviting. It always breaks and a yellow cheesy butterfat always oozes out flavoring whatever it touches. I have NO idea how difficult it would be to find a Queso Asadero in the states, but suspect it's not that difficult. If you can't find it, a Cheddar-Colby blend would be nice, as would Fontina or Monterrey Jack.

The photos show a lighter colored Lebanese Zucchini as it's what is found in abundance around here. Any zucchini will do, even the yellow ones.
Prep Time30 mins
Cook Time1 hr
Total Time1 hr 30 mins
Servings: 12 Servings
Calories: 491.25kcal
Author: DJ Foodie