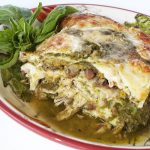 Most lasagna you'll try is tomato based. However, tomatoes are high in carbs, in comparison to many other vegetables (bearing in mind that tomatoes are technically a fruit). This recipe eliminates the tomatoes and goes for a cheesy, saucy, soupy, schloupy, bright green lasagna, with pesto as its main flavor punch. The end result is a sloppy brick of heavy green goodness!

This dish would be great with any number of low carb pastas. I've also done it by slicing the zucchini into very thin "planks". I've seasoned and grilled them, and used them as layers, in place of the lasagna noodles. I've also used all-purpose crepes, in place of the lasagna noodles. Both work and create delicious results! In these cases, omit the water, and use a low-moisture mozzarella, rather than fresh. There's no pasta to absorb the extra liquid.

Dreamfield's Nutrition Disclaimer: Due to the magic of the fiber coated matrix, a single 56 gram portion is shown as having 5 grams of digestable carbs. However, my recipe system isn't designed to display their nutrition information in the magical way in which they've been able to. As a result, I'm fudging the numbers to show 42 grams of carbs, with 37 grams of fiber. Technically, this isn't true, but it's the only way to have the math display numbers that match Dreamfield's claims.
Prep Time30 mins
Cook Time1 hr
Total Time1 hr 30 mins
Servings: 12 Servings
Calories: 820.37916666667kcal
Author: DJ Foodie