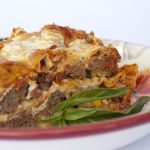 This is a pretty straight up, straightforward, no frills Lasagna. It's like how my Mom used to make (except with Bella Vita Pasta Sauce, instead of Ragu). That's not to say it isn't awesome, 'cause it is! People love my lasagna! It's simple and relatable, without being boring. Put simply, it's ... yum!

This dish also freezes really well. Because I'm a single dude, I bake it, then cut it into portions, chill it, then vacuum pack the individual bricks and freeze them. From there, I tend to put them in the microwave on "defrost" and literally re-heat them entirely, using the defrost option in the microwave. It takes longer, but it gives me something that feels fresh from the oven, much more so than "nuked in the nuker".

This dish would be great with any number of low carb pastas. I've also done it by slicing the zucchini into very thin "planks", or adding something like grilled eggplant. I've seasoned and grilled them, and used them as layers, in place of the lasagna noodles. I've also used all-purpose crepes, in place of the lasagna noodles. Both work and create delicious results! In these cases, reduce the tomato sauce by just a bit and use a low-moisture mozzarella, rather than fresh. There's no pasta to absorb the extra liquid.

Dreamfield's Nutrition Disclaimer: Due to the magic of the fiber coated matrix, a single 56 gram portion is shown as having 5 grams of digestable carbs. However, my recipe system isn't designed to display their nutrition information in the magical way in which they've been able to. As a result, I'm fudging the numbers to show 42 grams of carbs, with 37 grams of fiber. Technically, this isn't true, but it's the only way to have the math display numbers that match Dreamfield's claims.
Prep Time30 mins
Cook Time1 hr
Total Time1 hr 30 mins
Servings: 12 Servings
Calories: 739.915kcal
Author: DJ Foodie