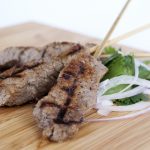 These flavorful skewers are AMAZING! The flavors are rich, salty, aromatic and complex, without impacting your blood sugars ... almost at all! You could eat piles of these things ... and they're pretty easy to make, too!

However, there's some wacky stuff going on, here ...

One of the primary flavorings is Fish Sauce. Fish sauce is like salt or ... soy sauce ... in Thailand. It's used everywhere and in everything, but ... to me ... fish sauce is weird. For one, it's called "Fish Sauce" (Nam Pla), which is bad enough to make me want to leave the room. I like fish and I like sauce, but sauce made out of fish? Too unusual! It's also FERMENTED fish (usually anchovies), which is extra icky. It's a lot of fresh little boney fishes, mixed with salt. It's covered then left to sit in the sun for about a year. Sometimes, they uncover it to let it air out and get a tan. After several more months, it's squished and the liquid is removed. Fish sauce! It's a pungent brown liquid. It's salty and it stinks like that weird cheese you're afraid to try ... mixed with old fish! If you have a really hot pot and add some fish sauce to the bottom of the pot, the odors stemming from the hot fish sauce vapor might make you exit the kitchen. You're almost certain to tear up and complain! I know I do!

The weirdest thing about fish sauce, though, isn't what it is, or how it's made, or how it smells ... the strangest thing is that ... IT'S DELICIOUS!!! It's a funky salty flavor, with some deep, hard hitting umami. It's yum! When combined with aromatics (ginger, lemongrass, lime leaf, etc), chilies, acids (like lime juice or vinegar) and something sweet ... it's amongst one of my absolute favorite flavors!