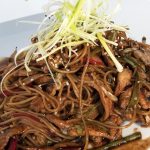 This dish feels like cheating. Pasta is a big no no, when your way of eating is low carb. However, there are low carb pastas available. They are of varying quality and impact on blood sugars. This is one where "your mileage may vary". However, if you've got some low carb spaghetti lying around, and some of my sweet teriyaki in the fridge, you're in for a real treat! This tastes something like the fried noodles you get at the local Chinese restaurant, except these are a little sweeter and total legal for this way of eating!

This dish would be great with any number of low carb pastas. Zucchini noodles would work, as would shirataki noodles. Also, if you want to bulk this out, you can use a little less pasta and add some thinly sliced cabbage, in place of the pasta. Sauté it with the peppers.

Thoughts on Pasta: I'm using Dreamfield's pasta in this recipe. It looks, tastes and cooks just like any other dried pasta that you may have used. They use some kind of fiber coating miracle matrix that keeps people from digesting the carbs. I don't want to claim that this product is perfect or that everyone reacts to it in the same way. I have read reports from diabetics stating that it DOES impact the blood, but that it's a slower release than most other pastas (meaning the rise and peak occurs later than it normally would, so ... check your blood levels several hours after eating it). Reports vary. Other diabetics have zero issue with it. Some low carbers claim it causes cravings for them, and others do not. Some claim it stalls them, others do not. My personal stance is that eating less than 2 servings at a time is acceptable and that it should be cooked as directed on the box, or even a little less. DO NOT OVER COOK (this breaks down the protective matrix ... which may be why some of the diabetics report changes to their blood sugar. These folks may have overcooked it). I almost always undercook it, by about 2 minutes. Then, after straining it, I cook it in sauce for roughly one minute. I also suggest eating only occasionally, no more than once a week. I have found that eating this about once every 2 weeks is perfect. I have been able to eat this and continue losing. However, if I eat it more than that, I tend to start developing cravings for it, which ... is never good. A well maintained low carb way of eating should result in very few cravings, if ever. This is a product that can, in my experience, cause cravings ... if abused. I very much feel that this is a great product and has never held me back from continued losses, however it's technically for maintenance and is a very high rung on the Atkins ladder (grain level). Eat with caution ... but also ... ENJOY IT. IT'S DELICIOUS!

Dreamfield's Nutrition Disclaimer: Due to the magic of the fiber coated matrix, a single 56 gram portion is shown as having 5 grams of digestable carbs. However, my recipe system isn't designed to display their nutrition information in the magical way in which they've been able to. As a result, I'm fudging the numbers to show 41 grams of carbs, with 36 grams of fiber. Technically, this isn't true, but it's the only way to have the math display numbers that match Dreamfield's claims.
Prep Time15 mins
Cook Time15 mins
Total Time30 mins
Servings: 6 Servings
Calories: 570.525kcal
Author: DJ Foodie