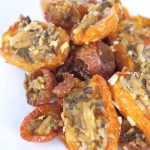 Dried tomatoes are easy. If you have a tomato, slice it and lie it in the sun ... you'll get ... A SUN DRIED TOMATO!

I'm personally a bit leery of leaving things out the sun, especially things I plan to eat. So, I use an oven. Some might use a dehydrator, or ... a fan beneath a pile of stacked vents, or a blow dryer. Again, I opt for the oven, and tend to put a little extra goodness on my tomatoes, but ... that's just me.

As a general rule, you want your tomatoes to all be the same size and thickness, as much as possible. I've done this with large slices of tomatoes, on a rack. This usually creates large dried "wheels". While tasty, they're a bit leathery and large. Not as practical as a smaller tomato. More often than not, I go for small cherry-like tomatoes. Normally, you can find a "variety pack" of multi-colored cherry tomatoes. You can also go to a farmers market and pick out a nice assortment of the larger, plumper, small tomato varieties. The really tiny ones are tough to work with. You want something like the size of a super large grape.

Here's a basket of perfect candidates:

Just a random thought ... I initially thought this might be one of those random recipes that no one would ever make themselves, but ... truth-be-told, I make these quite often. They're quick to prepare, and then it becomes a "set it and forget it" kind of thing. Interestingly, my own mother makes them! It's one of the many ways she gets my father to eat something resembling vegetables! He likes them dried and coated with cheese, then tossed into his salads. Me too!

I use these in sandwiches, tossed with pasta, tossed in a salad, as a base for an oven dried tomato pesto, tossed into a tomato sauce to tighten it up, etc. Many uses for a simple dried tomato!

One Trick: Often, I will make my tomatoes and place them into the oven at night. I will put the oven on the lowest setting (warm), for about 30 minutes. Then, I will turn the oven completely off and go to bed. In the morning ... Oven Dried Tomatoes!
Prep Time15 mins
Cook Time6 hrs
Total Time6 hrs 35 mins
Servings: 4 Servings
Calories: 79.8675kcal
Author: DJ Foodie