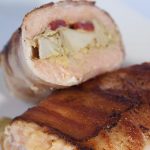 Yep, I wrapped something in bacon, again! It's interesting. As I assemble my recipes and display them, quite publicly, I'm becoming keenly aware of how much bacon I actually do eat! Yes, I buy bacon in a variety of forms. Yes, I have multiple T-Shirts proclaiming my love for bacon. I have a big bowl of solid bacon fat in my fridge. There's no question that I love bacon, but ... WOW! I REALLY LOVE BACON!

This stuffed salmon recipe is quick and easy recipe. Much quicker than one might think. Most of the ingredients come out of jars or cans, except the salmon. That doesn't hold it back from being outstandingly delicious, though! Ultimately, little more is done than slicing each salmon fillet, opening some jars, cutting a few ingredients, mixing them in a bowl with mustard, slathering this mixture onto a piece of salmon, topping it with a piece of salmon, wrapping it in bacon and throwing it in the oven! It may sound like a commotion, but it's really not. It's a bit messy, but you can have this in the oven within 20 minutes for 4 REALLY nice stuffed salmon fillets!

Sometimes, I omit the mustard in the filling and serve this with a simple tomato sauce and sautéed green beans.

Note to Pescatarians: Rather than holding this together with strips of luscious bacon, you could use a sharp knife to make a deep incision in the side of your salmon fillets, resulting in a salmon "pocket". You can stuff your filling into this "pocket". Then close it with a wet skewer or a few toothpicks.
Prep Time20 mins
Cook Time15 mins
Total Time45 mins
Servings: 4 Servings
Calories: 827.3325kcal
Author: DJ Foodie