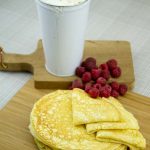 These crepes are extremely versatile. They're "tougher" than your standard soft and svelte French crepe. They can handle a little more thrown at them. They're also very neutral, from a taste perspective. They're more a "purpose" than they are a "flavor". I use them for all kind of things! Either, as a crepe, filled with sugar free jams, shmears and berries, but also as a "wrap".

It's not at all uncommon for me to put a slice of turkey into one of these things, then cheese, a slice of tomato, some lettuce and mustard. Roll it up. Deli Wrap! I've used them in place of tortillas for enchiladas. You can roll them up really tightly, and slice them in to noodles, too! Toss these with some zucchini strips, sauce and cheese and ... it's VERY pasta like ... induction style!

These are a "mild" pain to make, but they hold up well in the refrigerator, are very much "induction friendly" and are just great to have lying around the house. I used to be in the habit of making a double batch, stacking each crepe between paper towels and wrapping them up in the fridge. Whenever I wanted a snack, be it sweet or be it savory, I had a little crepe/wrap to surround it with!

(It should be noted that this isn't my recipe. Unfortunately ... I don't remember where I got it from. It's just in my notes. A quick search shows this all over the internet, so ... it's "out there" for the taking ... I hope.)

Induction Friendly Note (Whoopsie!): This is a new note, placed roughly 9 months after the original recipe. Via Facebook, Theresa F. gave me a quick lesson in lactose and the aging of cheeses. Ricotta, being a fresh cheese, is NOT considered induction friendly. I was wrong in my original notes. Whoops! I knew dairy was allowed, but had long forgotten that not all dairy is equal. Cream, butter and hard cheeses are ok. Ricotta, cottage and goats' ... are not.

Theresa says, "Well, technically induction is only supposed to last 2 weeks, even though most of us stay on longer. It's supposed to convert your body from burning carbs as its primary fuel, to fat, as well as help you bust through sugar addiction and cravings. Lactose is just as addicting as sucrose and fructose Dairy is also very easy to overdo it on, and a lot of people are more sensitive to the inflammatory effects of dairy than they realize. So it's basically like one big whole body test to see what you really truly can handle.

When making cheese (or any fermented foods really), the bacteria eat the sugars within the base ingredients. They in turn let off waste products that develop into whatever you're going for- like yogurt, kefir, sauerkraut, cheese.... The longer a product ages, the less sugars remain, while fresh cheese will not have had the chance for these bacteria to eat away at the lactose. Butter has had most of the cream separated, and has very little remaining lactose.

Oh and heavy cream is the cream that rises to the top of milk, while the whey (what contains more lactose) sinks to the bottom. Whey is used a lot as a starter culture to get fermentation going for pickles and krauts since its high in sugar and bacteria."