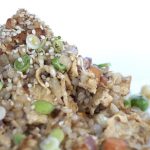 When it's on the plate, in a bowl, under a nice piece of chicken, it looks and tastes just like any other fried rice recipe. I've even made it for friends, who were none the wiser. If you like fried rice, and you look forward to it at your local Chinese or Japanese take-out joint ... you will not be disappointed!

This is one of those low carb, low glycemic miracles of flavor and texture. The "rice" used is "Cauli-Rice", or Miracle Rice (or a blend, which I'm prone to doing). A standard fried rice, is usually a lot of rice with a small amount of "stuff" in it. In this recipe, there's a much higher "stuff" to "rice" ratio. I assure you that it doesn't diminish the quality, whatsoever!

This is a fairly basic version, but it's common for me to add MORE stuff to it, when I make it. Consider this recipe as a base. I'll often add zucchini, mushrooms, bean sprouts, green beans, onions, etc. You can also obviously add shrimp, Chinese BBQ pork, chicken, beef ... duck ... lap cheong ... whatever!

(On a personal note ... I have to confess that this is one of those that really gives me some portion control issues. I think it's just the deep fondness I have for the real thing, but ... this is difficult to eat just a small amount of ... I tend to want my bowl to be bottomless.)