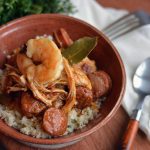 A chicken jambalaya recipe is whole big thing. It's this and that, with a touch of the other. It's a big gurgling hot cauldron of anything from alligator and rabbit to ham, shrimp and tomatoes. It's got its roots in the Caribbean, Africa, Spain, France and/or The Southern United States, etc. depending who you ask ... There is literally no end to the way this can be made. No set combination of ingredients is defined as "Jambalaya". It's more a concept ... and a delicious one, at that!

Mine is a rice-free Creole tilting taste sensation. It's really quite simple to prepare and mostly just involves waiting for it to cook and for the flavors to meld together into a mind blowing, spicy, hot and wonderful mélange of French Quarter goodness!

Note: Because Jambalaya normally has the rice mixed into it, it's a thicker meal. This version is more like a stew, which can be served with rice, or a rice substitute (I know people that love it on pasta, too!). Because of this, you can add a little guar and xanthan gums, which will thicken it, slightly. This is totally optional, but a nice way to throw a little more viscosity at it. I usually add it, but would understand why someone might not.