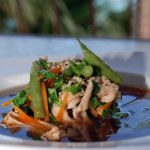 This one has an odd history of development. Its inception started with the one-pot meal concept of "Chanko-Nabe", which is a sort of Japanese stew fed to Sumo Wrestlers ... so they can gain weight! Mine isn't intended for that purpose, so don't fret. Chanko-Nabe often contains noodles and is served in massive portions with beer and rice (as part of the Sumo Wrestlers' diet). I'm not suggesting you eat like a Sumo Wrestler, but I AM saying that this soup must be good, if Sumo Wrestlers are so able and willing to eat such large quantities of it!

Ultimately, my version is a noodle-free, soy-ginger based chicken broth, with chicken simmering in the broth, for about an hour. Then, remove and break the chicken into large chunks. Add a variety of fresh vegetables and the chicken, simmer for a few minutes. You can really use just about anything. Broccoli, radishes, bean sprouts, green onions, leeks and/or different mushrooms might be some alternative additions. You could also throw some tofu, or Shirataki (Miracle) noodles, in there! It's a full, warm, healthy and very tasty one-pot meal. Adjust seasoning with a little salt or soy sauce (it probably needs it, but ... be careful with that soy sauce. The carbs add up fast.) .... EAT!