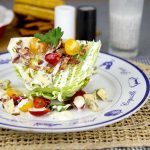 This is a strange lead in to a recipe, but it's the only place I can think to start!

My father is a picky eater. Like, an over-the-top, silly, ludicrously picky eater. He's such a picky eater, he'll even allow himself to be rude, if he doesn't like something. If he won't eat it, it's simply not getting eaten. Period. Vegetables, pretty much, are right out. He is a true "Steak and Potatoes" man.

While my father will likely kill me for divulging such sensitive info, I would never have thought to add "The Big Green Wedge" to my website, were it not for him! So, Dad ... I dedicate this one to you!

The puzzling thing is ... he won't eat lettuce (at least, I don't "think" he will). He won't eat vegetables. He won't eat "green things", but ... THIS is a big slab 'o green thing! It's BAFFLING to me why he would eat this, while avoiding a million other far tastier things!

At the very least, I've come to one logical conclusion. THIS salad is like the STEAK of salads! I have to assume that a vegetarian would look at this like a steak, right? It's a man salad, for a man! Sure, a woman can order and eat the steak of salads, but ... a man can order "The Great Wedge" and ... still feel like a man!

So, for those of you out there facing feeding picky eaters, people who won't eat their salads ... here's one to put in front of them.