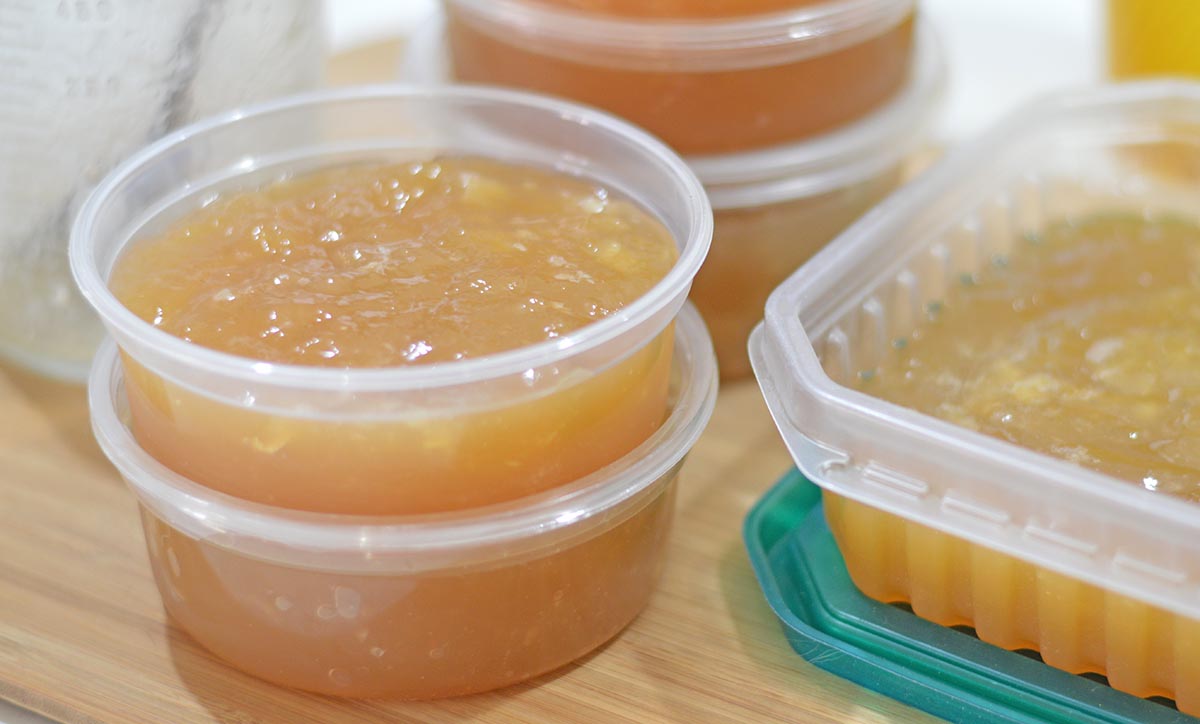 The backbone of most good restaurants is their “stock”. The name has somewhat recently been upgraded to “bone broth”, but it’s basically the same thing. It’s bones simmered in water for at least an hour, usually quite a bit more. The resulting liquid is strained, and the bones discarded. The liquid that results in “bone broth”.

Bone broth gives body and soul to soups, sauces, and braised (foods cooked in liquid) meals. Most restaurants seem to use either beef or chicken, but many whip up their own special batches of fish, lobster, shrimp, pork, turkey, duck, rabbit, and so on. It’s a great way to eek out a bit more flavor, all while utilizing something that would otherwise be waste.

Traditionally, or at least in French cooking, it’s bones combined with a mixture of 50% onions, 25% carrots and 25% celery. Typically, some peppercorns are thrown in, as well as some herbs. Garlic is somewhat common, as well. Usually, the bones simmer for a few hours, then the vegetables are aromatics are added for the final hour or two, to keep some of the vegetables’ vibrancy.

I’m sure I’ve made thousands and thousands of gallons of “bone broth” in my day. Restaurants will go through buckets of the stuff, daily. While a big pot of Creamy Chicken Chowder can absolutely be made with water, and taste quite good, the same chowder made with chicken stock will have more flavor, depth, and bit more viscosity to it.

Aside from the taste and foundation these broths lend, they also bring gelatin to the table. Collagen is the main protein in bones and the various connective tissues. As the bones simmer, that collagen is broken down into gelatin, which is fantastically healthy and wonderful for joint health. It’s also the gelatin that thickens the broth, especially as the broth is reduced and concentrated.

Below is a video of my roasted turkey bone broth, after it’s been chilled. See how it jiggles? That’s gelatin!

Lately, I’ve gotten in the habit of buying while turkeys, which I debone, break up, and use the meat in a variety of ways. From there, I roast the bones, simmer for about 6 hours, strain, then put the liquid back on the stove to reduce by about a half to two-thirds. There’s no specific need to reduce it. I’m personally so keen on batch cooking and freezing my recipes that anything I can do to save some freezer space is something I’ll do. If I’m using it in a sauce, the fact that it’s already reduced is helpful. If I’m making a soup, I’ll usually add roughly an equal quantity of water in the pot, otherwise the turkey flavor shines a bit too brightly. The goal is a nice foundation and backbone upon which flavors will be built. If too much is added, the turkey taste can be overpowering (unless that’s the goal).

Some love it strong. Some even go so far as to have it in the morning, instead of coffee!

I’m keeping this particular broth dead simple. There are no ingredients other than water, fat, and turkey bones. If I want onion or carrot flavor, I can add it later. This approach arguably prevents me from wasting perfectly good onions, celery, and carrots!

Finally, I’m not the world’s greatest butcher. I roast the bones, which still have quite a bit of meat attached to them. I’ll roast in a high heat oven, turning the bones over a few times. Once they have a nice color, I remove them from the oven and set them on the countertop until cool enough to handle. Then, I pick all the cooked meat off, with my fingers. That gets chilled, chopped up, and usually winds up inside a Turkey Salad Sandwich! 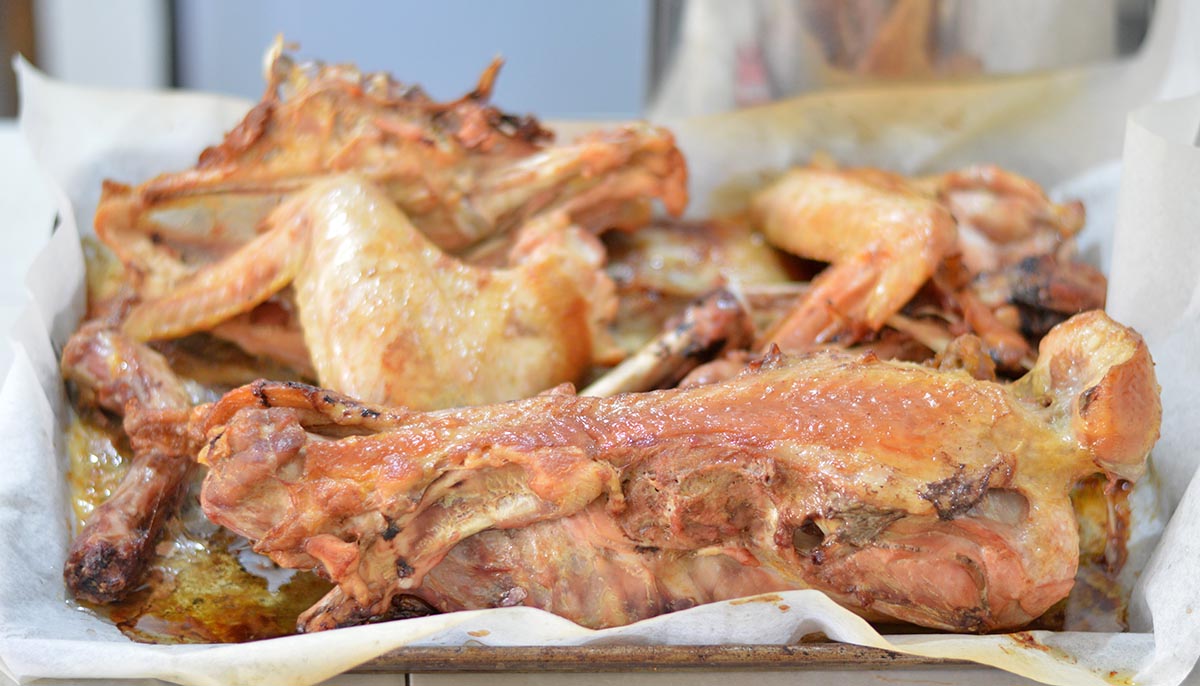 The nicely browned bones go in a big pot with water, where it just simmers away for most of the day. Then, strain it and discard the bones. You CAN make a “second stock” with those bones if you’d like. This will result in a thin and significantly less flavorful bone broth, but it’s undoubtedly “the extra mile”. If you were to strain the second stock and reduce it by a full 75%, you’d likely have a really nice little stock to play with!

At this point, it’s usually fairly late in the day. I usually put the uncovered, hot bone broth in the fridge to cool, overnight. The next morning, there’s usually some fat that has floated and solidified on the top. I scrape that off, then put the pot back on the stove to simmer for another 4 or 5 hours. Then, I put that back in the fridge to chill and solidify. From there, I portion into little cups and freeze!

I know this may all sound like a lot, but it’s really just allowing a pot to gurgle away while you do what you do. It’s healthy, a great use of the bones, you can get a bit of Turkey Salad Sandwich out of it and it’s just a fantastic little thing to have bumping around the fridge or freezer!

Servings Note: Recipe will make roughly 1/2 gallon (8 cups or 2L). The recipe states 16 servings, which is about 1/2 cup (120mL), which would be about right for a cup of soup (with added ingredients), or a very nice, thick sauce. If the goal is a stellar cup of morning bone broth, then this will make about eight 1-cup (240mL) servings.

Nutrition Note: Because most of this is strained out or skimmed off, the math behind this nutrition is funky. I’m setting everything to zero, except the turkey carcass, which is actually set for the value of 1/2 gallon of turkey broth. The final totals are roughly accurate, even if the math is wonky. 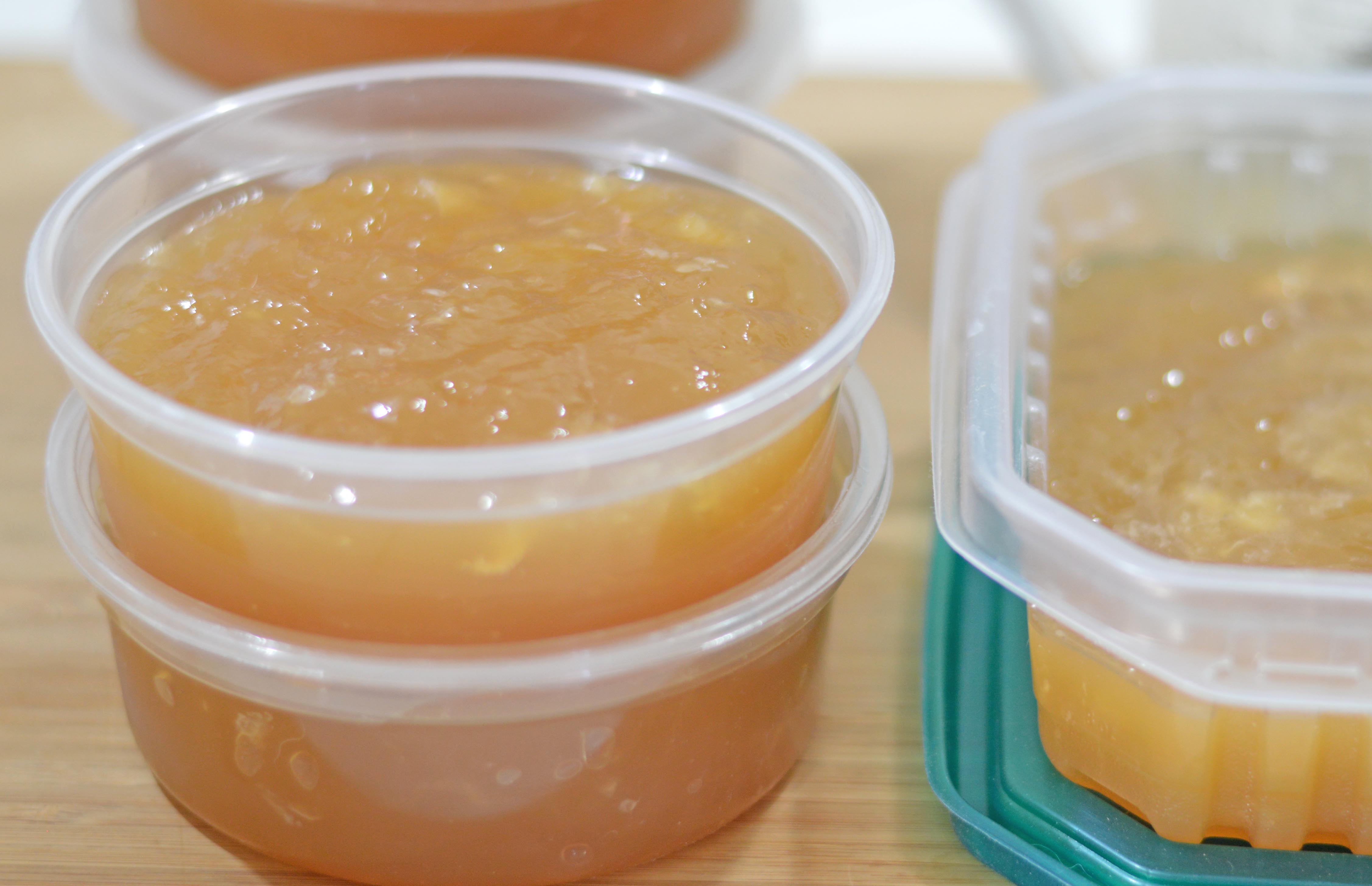 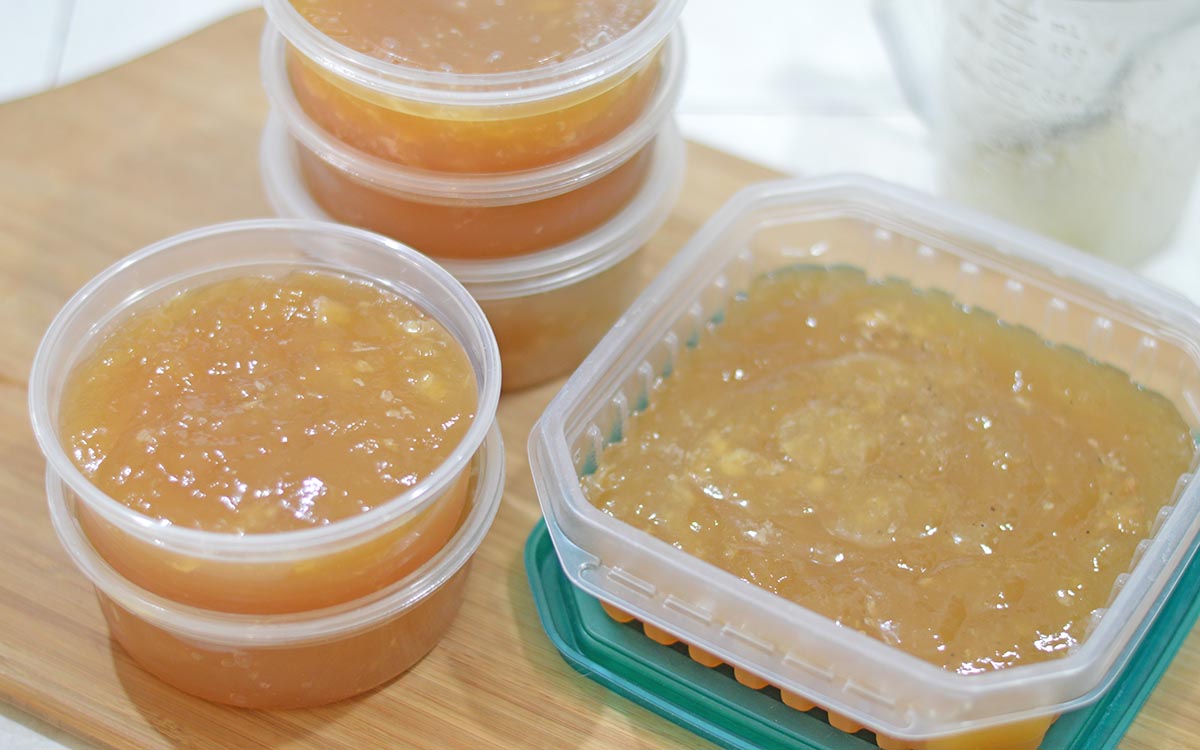 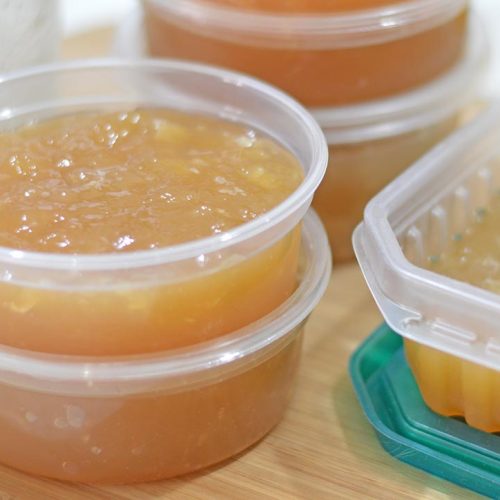