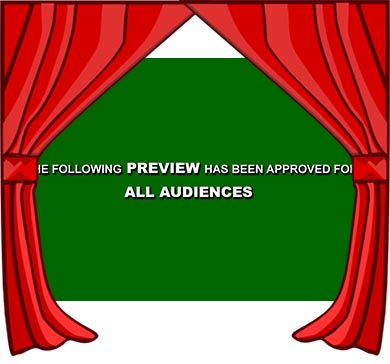 For some reason I got it into my mind that “cake” was a good idea. Not CAKE cake, mind you, but little dollops of fried circular yumminess. These will come in the form of things like curried cauliflower cakes, polenta cakes, Thai fish cakes and salmon patties. Each and every one essentially some form of tasty pancake. Here are just a few which will be coming up in the next few weeks. YUM! 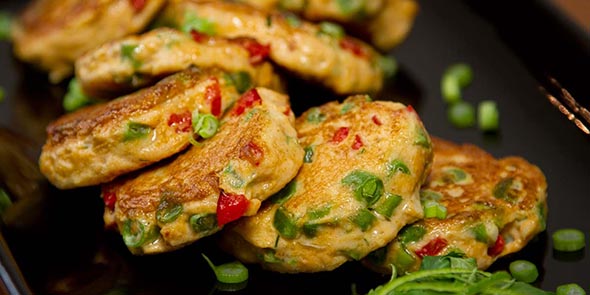 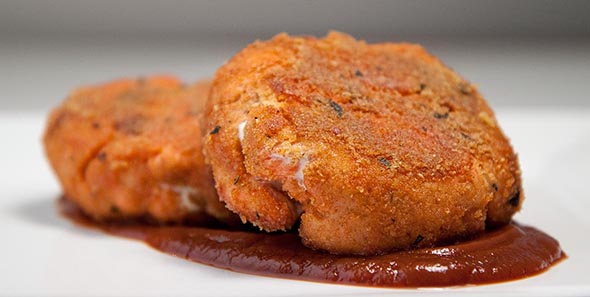 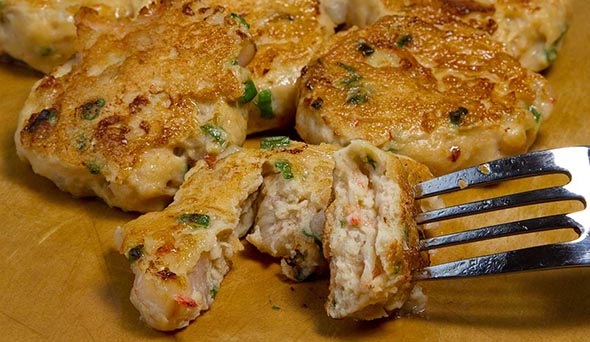 Nominate Me for SAVEUR!

SAVEUR is gathering steam for its 4th Best Food Blog Awards. Last year they had near 40,000 nominations. Competition is fierce, with some INCREDIBLE blogs out there! I looked through last year’s winners and am humbled by each and every one. However, it’s these kinds of things that will push and drive me to give better blog, with better recipes, clearer writing and spectacular imagery!

If you think I’m worthy of a nomination, I would love it if you’d throw a few nods into my particular direction. Nominate me for … whatever category you’d like! Best Special Diet? Best New Food Blog? Best overall?! Sure … shoot for the moon!

If you’d like to nominate me for some seriously prestigious blog awards, click the image below. A HUGE THANK YOU to any of you that consider this!!! 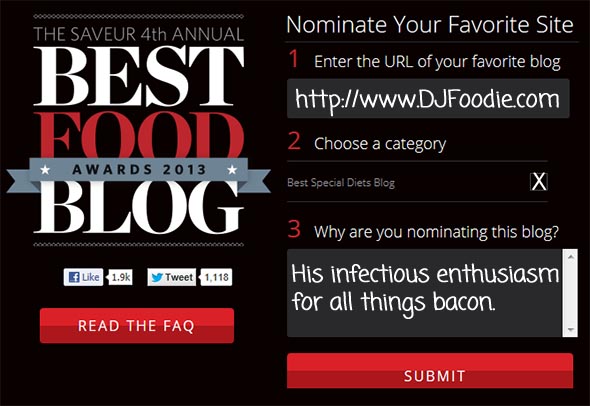 Here’s a little bit from a multi-part series which I’ll roll out in the upcoming week or two. It starts a bit slow and short and stunted, but it gets rolling. The assignment was “Food Memoire”. It’s not at all related to low-carb, but it may give a little insight into my origins …

On with the show!

The irate ancient woman reached back and slapped my young face again, probably for my poor parsley chopping skills.

UGH! I hate it when she does that! Her paws are bigger than my Dad’s. Speak, Oma. Speak! I know you’re from Planet Hamburg, but you’ve been here for at least 30 years. Can’t you uncrumple your face long enough to spit out a few English words about my knife skills?! A slap, with gibberish and spiteful mime does me no good!

Again, she throws the finely chopped parsley on my cutting board, wags her massive stump of an index finger at me and glares down her nose through her thick rectangular glasses while emphatically saying something like, “parsley … parsley PARsley … ParSley!” in her native tongue.

Useless, as usual. Does she want it finer? Coarser? Cooked? What does she want? Why does she care so much about the parsley, anyway?!

Oma smugly waddles her little knock-kneed legs back over to the worn hickory table. She defiantly slumps back down and continues washing and drying each of the day’s strawberries, one at a time.

To be continued … in part II.

Today we have some requests coming from readers, including the Shrimp and Grits, as well as the German Fautato Salad. The slow cooker pork was an experiment in quick simplicity. The end result was soft and luxurious shredded pork, but I won’t lie … that pile of meat wasn’t the most ATTRACTIVE pile of meat I’ve seen, but it was absolutely awesome going down! There’s also my take on the ever popular “Crack Slaw”, which you can’t browse long in the low-carb underworld without bumping into a version or two. Here’s mine!

Until next time … keep it cheesy! 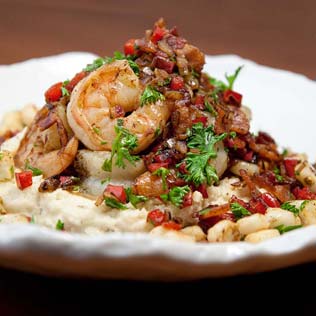 This oft served breakfast dish was one of low-carb’s “forbidden fruits” in my mind. It’s one of the most luxurious and comforting foods I know of, and I’d long assumed it was out of my life, more-or-less, forever. Grits, being corn, and corn being evil, I seemed destined to live a grits-free life. I’ve been sad. Alas, that is not true! Read on!

I’ve lived all over the United States. I’ve driven across the country several times. I’ve driven up and down the west coast. I’ve visited both Alaska and Hawaii. I’ve driven from Maine, down to Washington DC and back. I feel as if I’ve got the US pretty well covered … except … the South East! I’ve never been to New Orleans. I’ve never been to Tennessee, or the Carolinas, which is where this particular recipe originates from. Also known as the “Low Country”, this South Carolina/Georgia coastline dish. The food in the region is SIMILAR to Cajun and Creole, but with its own regional variations.

How do I know? Thank you, Wikipedia! ?

Note: This recipe assumes you’ve already got 4 cups of LC Grits, sitting warm by the stove. The rest of the recipe is focused on the shrimp! 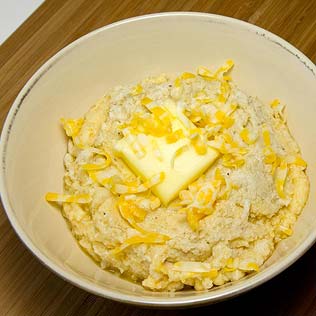 Grits are corn. No two ways about it. Corn is mostly frowned upon within a low-carb way of life, due to the sugar and starches they contain, in abundance! This makes me a bit sad, in that I happen to LOVE corn, going so far as growing my own, once upon a time!

Then, a while back, I discovered there was a low-carb version of hominy, which results from the heirloom variety of corn being used and the treatment it undergoes. Somehow, this results in a tasty corn based product, which is approximately 4 net carbs per half cup. You can read a little more about the history of this findings in my Pork Tamales recipe.

Anywhooo …. grits come from a Native American origin, where it was ground. It is more likely known as a Southern US breakfast food; something like porridge. This is what we have here. This stuff takes the PERFECT place for what you used to call “a starch”. Imagine some shredded pork on top of this, with a side of broccoli. OH … YUM!

Note: I used a mixture of half almond meal and half pureed hominy. You COULD just use the straight hominy puree, but I find it holds together a little better with the almond meal, while additionally dropping the carbs per serving. Choose your own adventure! 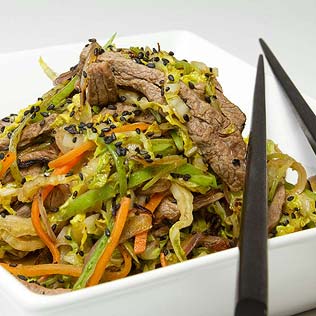 It’s my understanding that the original “Crack Slaw” name comes from the addictive nature of this particular slaw.

While I can’t really do anything about the inception of the name, I have tried to give it a little boost. Just about every recipe I’ve seen for this amazing little dish is based on ground beef, cabbage and variations of ginger, soy and chilies. Yes, this is all tasty, quick, easy and totally yum, but I see it as a bit of my job to take things and kind of twist them around and have a bit of fun with them!

I’ve chosen to take the same flavors and build something a little fresher, a little more vibrant. I’ve added a few more veggies and flavors, and combined them with a nice very thinly cut flank steak. This is all finished with a spicy soy sauce, sesame oil and black sesame seeds.

It’s these little tweaks which take it from “Crack Slaw” to UBER Crack Slaw.

Green Onions Note: I had intended to add scallions (green onions) to this recipe, but that angry cold spot in my refrigerator got a hold of them and froze them into a hard dark green bundle of tundra-fied wonkiness. I’ve included them in the recipe, even if they are not in the picture.

Organization Note: I ALWAYS recommend reading the recipe first, then gathering the ingredients prior to cooking it. This recipe is no exception. The actual cooking time for this recipe is about 4 to 5 minutes, in a screaming hot pan. These ingredients are all cut very thin, with the idea being, they will cook REALLY quickly. If your ingredients aren’t cut and ready to rock, you’ll burn whatever is in the pan, or just create a whole big scene … and who really wants that! Be prepared to Wok it Out! 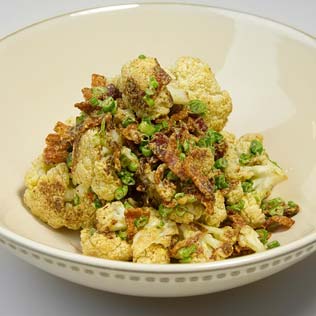 I wish I could remember the first time I was introduced to this super food. It’s actually fairly simple, with just potatoes, bacon, green onions, vinegar and Dijon. I’ve had it with the potatoes boiled, fried and roasted. I’ve never met a German Potato Salad that I didn’t like! That said, the KEY to a good German Potato Salad, in my world view, is that it be WARM. Somehow, when it cools down, it loses its comfort factor. It loses the sumptuous warm yumminess that can only be found in the soft and slightly acidic nibble of the thing. MUST be served warm!

This salad is incredibly easy. Simply cook the cauliflower in a large pan, then throw it in the oven to roast. While it’s roasting, whip up your dressing. A few minutes later, remove the cauliflower from the oven, place it a bowl, toss with the dressing and … serve with a smile! 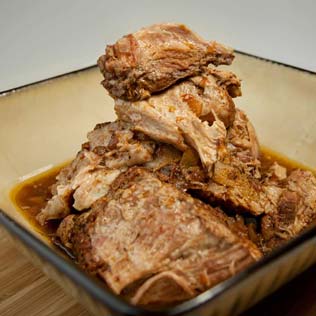 If you’re on the lookout for a simple recipe, yielding a lot of food, with virtually no effort, look no further!

This recipe is literally intended to take 5 minutes. As long as you’ve got some salsa (really any salsa will do), the only process is to heavily season a large piece of pork shoulder (also called pork butt, or Boston butt), sear the surface in a really hot pan and then place it in a crock pot filled with salsa. Nothing else needs done!

There is MORE than enough liquid in the pork and the salsa to not need anything “extra”. As the pork cooks, the fat and any connective tissues break down, melt and help the actual “muscle” of the meat become soft, tender and juicy!

Seasoning Note: I really wanted to keep this recipe “pure” and simple, which accounts for no real seasoning. I also suggest using any salsa, be it fresh and homemade, or purchased in a jar. The idea is to create something easy and with a “set it and forget it” idea. However, I would suggest using the spice blend in my soft and shreddy pork recipe for this, prior to searing. It’s a good way to add a little more character to this dish, and really doesn’t take more than an extra minute.

Serving Suggestion: I HIGHLY recommend serving this with a side of my grits/polenta recipe. A big chunk of soft pork butt and the salsa juices cascading down the sides of a big dollop of grits just gives me the warm fuzzies.